2
Diego Luna is a Mexican actor, director, stage actor, and producer. He is well known for his roles in several films, such as Tommaso Moreno in the 2006 drama Fade to Black. He also voiced Manolo in the 2014 Fox/Reel FX animated film, The Book of Life.

For Disney, he played Captain Cassian Andor in Rogue One. Luna will be reprising his role as Andor in his own series on Disney+.

Cassian Andor
(Rogue One)
Add a photo to this gallery

Diego Luna at premiere of Star Wars: The Force Awakens in December 2015. 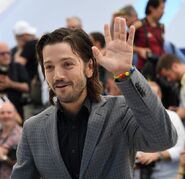 Diego Luna attending the 2020 Sundance Film Fest.
Add a photo to this gallery
Retrieved from "https://disney.fandom.com/wiki/Diego_Luna?oldid=3916075"
Community content is available under CC-BY-SA unless otherwise noted.