Diggie Smalls was a recurring character in the Disney Channel original series Liv and Maddie. He is captain of the boys' basketball team and close friends with Maddie. He was Maddie's boyfriend in seasons 1, 2, 3 and 4. It is later revealed he is Artie's brother.

Diggie is not your typical jock. He’s driven, and loves basketball, but he has a soft side that he isn’t afraid to expose. He’s funny and quirky, and he has a certain charming nature to him that we see when he gets nervous and playful around Maddie. He’s loyal and a great friend, not only to Maddie but to her brother Joey and to all of Maddie’s friends as well![1]

Diggie is a sophomore at Ridgewood High and is a basketball player at the school's basketball team.

Diggie usually wears casual clothes throughout the series. He is a brunette with brown eyes.

Diggie and Maddie have a friendly relationship. They're good friends and appear to be very alike. Diggie has made an attempt to ask Maddie out, but her miserably failing to flirt/respond back. When Liv pretends to be Maddie and asks Diggie to the dance, he rejects, only because he knew it was Liv pretending to be Maddie. He claims that he knows Maddie, that even though her sister has the same face, he knew that it wasn't her. He explained how Liv-pretending to be Maddie-didn't do the cute thing she did with her charm bracelet when she was nervous. He and Maddie got back together in Choose-A-Rooney and they are still together when the series ends.

When Liv first meets Diggie, she's a little confused of how he talked like a sport's announcer, but then he explained why. So afterwards she gets him to say how he would introduce her if he were a sport's announcer. After he does, she smiles, glances at Maddie and says, "Um, approved." 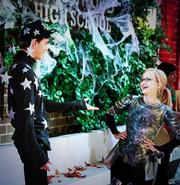 Retrieved from "https://disney.fandom.com/wiki/Diggie_Smalls?oldid=3317166"
Community content is available under CC-BY-SA unless otherwise noted.