"Gawrsh"
"Duh-h"
"Aye-aye."
Dim-Witty Duck, as his name indicates, is not very bright. In fact, he is very much a duck version of Goofy. An occasional sidekick of Donald Duck's, his role seemed to mirror that of Goofy to Mickey. Later he signed on as Moby Duck's ship hand, serving pretty much the same Goofy-like role. It is unclear whether he is a member of the extended Duck Family. He made his first comic appearance in the comic story "The Vanishing Banister" (Walt Disney's Comics & Stories #330, March 1968). Unlike Moby Duck, he has not made an animated appearance on film or TV. 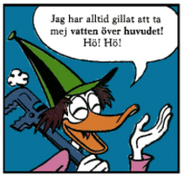 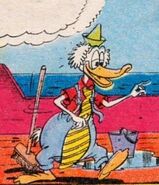 Retrieved from "https://disney.fandom.com/wiki/Dim-Witty_Duck?oldid=3117713"
Community content is available under CC-BY-SA unless otherwise noted.