Dimetrodon meaning "Two-measures Tooth" is a carnivore meat-eating pelycosaur synapsid, an ancestor of the mammals, that lives during the Permian Period, long before the dinosaurs evolved. Its herbivorous cousin Edaphosaurus would appear in assorted theme park attractions.

The Dimetrodon has a large sail-like flap of skin along its back, dense with blood vessels. The sail was supported by long, bony spines, each of grew out of a separate spinal vertebra. The sail may have been a thermoregulatory structure, used to absorb and release heat. The sail may have also been used for mating and dominance rituals, and/or for making it look much larger than it was to predators. Dimetrodon had sharp teeth and clawed feet.

In The Rite of Spring segment, a pair of Dimetrodon were seen, one was yawning and the other one was eating a Nothosaurus. Even though they were not dinosaurs, they lived with the dinosaurs at the same time. One was seen when the Tyrannosaurus rex arrived in the thunderstorm. Another Dimetrodon (or possibly the same one) was running away along with a Parasaurolophus, a Triceratops, a Dimorphodon, and 2 lizards from the Tyrannosaurus rex hunting and chasing them.

One Dimetrodon was seen after the Stegosaurus lost the fight against the T-rex along with a group of herbivorous dinosaurs (a Parasaurolophus, a Triceratops, a Corythosaurus, and a Diplodocus) looking and watching. While there were no Dimetrodon seen again at the end of the segment, they most likely became extinct in the drought of starvation, and dehydration.

A deleted sequence from the film would have featured a Dimetrodon snatching the newly born Arlo from the farm and running off into the woods, with Poppa Henry pursuing the beast and rescuing this son. This scene would have served as an explanation for Arlo's fears of the world outside the family farm.

Keeping with newer research speculating that Dimetrodon might have had even more mammalian traits and to give the film's "prehistoric western" universe an analog to wolves and coyotes, concept art for the sequence depicts the Dimetrodon with hair and pointy ears.

Dimetrodon (meaning "two measures of teeth") is an extinct genus of synapsid that lived during the Early Permian, around 295–272 million years ago (Ma), long before the first dinosaurs evolved. It is a member of the family Sphenacodontidae. The most prominent feature of Dimetrodon is the large sail on its back formed by elongated spines extending from the vertebrae. It walked on four legs and had a tall, curved skull with large teeth of different sizes set along the jaws. Most fossils have been found in the southwestern United States, the majority coming from a geological deposit called the Red Beds in Texas and Oklahoma. More recently, fossils have been found in Germany. Over a dozen species have been named since the genus was first described in 1878.

A Dimetrodon with a Parasaurolophus, Dimorphodon, and Triceratops running away from the Tyrannosaurus rex 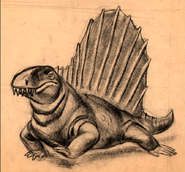 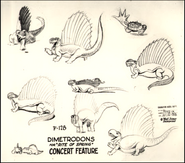 Dimetrodon concept for The Good Dinosaur 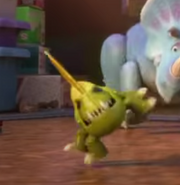 In Toy Story That Time Forgot