The Man with No Name from Sergio Leone's "Dollars Trilogy"

Credit, beskar, keeping his helmet on

The Empire, droids (formerly), when someone hurts "The Child", someone try to double it, being asked to remove his helmet

“I'm a Mandalorian. Weapons are part of my religion.”
―Din Djarin

Din Djarin aka "The Mandalorian" also sometimes called Mando is the main protagonist and the titular character of the Disney+ original series the Mandalorian. He is a reputed Mandalorian bounty hunter operating at the time of the New Republic some years after the fall of the Galactic Empire. During one of his huntings, he met a mysterious Force-sensitive infant of the same species as Yoda nicknamed "the Child" who happened to be his target with whom he formed a close bond and to seek to protect at all costs, putting him in conflict with other bounty hunters as well as with a former member of the Empire who had originally hired him. Din is an "adopted" Mandalorian, since he wasn't born on Mandalore.

In his youth, Din Djarin lived with his parents on a unidentified planet that was victim of a separatist attack in which his parents lost their lives by protecting him. A super battle droid flushed him out and would have killed him without the intervention of Death Watch. This tragic event remained in his memory years later.

Some time later, he joined a Mandalorian clan called "The Tribe", settled on a volcanic world. When he was old enough, Din pledged allegiance to the Mandalorian creed, thus becoming one of their own and acquired armor and weapons from his new people, before joining the Bounty Hunters' Guild. In 9 ABY, five years after the destruction of the second Death Star and the final defeat of the Empire, the Mandalorian had gained an excellent reputation as a bounty hunter, which provoked the jealousy of other members of the Guild.

He once teamed up with two mercenary Twi'lek, Qin and his sister, Xi'an, and things went very badly.

Competent and dangerous, this bounty hunter is able to be ruthless and merciless to those he tracks or those who put themselves on his way. He is constantly alert and will draw his weapons if he feels as though someone is about to attack him. Endowed with a morality more than doubtful, it is difficult to surround his facial emotions because he never removes his helmet.

Solitary and somewhat antisocial, the Mandalorian has a respectful relationship with the Mandalorian Armorer who is also aware of the fact that he is an orphan, he is also able to show great respect towards someone who earns his trust, like Kuiil whom he even offered his gratitude when the Ugnaught has at the same time refused a payment and also to becoming his partner.

Mando deeply respects the creed of Mandalore, just like the rules of the Tribe, that is to say: never removed his helmet in front of a living being even if that life depend and would prevent anyone from doing it.

Due to having been an orphan himself, he seems to have a deep sympathy for the other orphans and this same sympathy also extends to "The Child" who was initially a target for him, caring first of his security only to get his payment for it evolves to the point that he risks his life and betray the guild to save him from these employers.

In "Chapter 1", On a planet of ice, Mando goes to a bar filled with rogues, three of whom harassed a Mythrol. One of the stalkers tries to provoke him, even going as far as to graze the beskar armor with a knife. Mando grabs a glass and uses it to hit the thug before banging him with the second scum and killing the Quarren by closing the door on him, cutting him in half. The Myrthol wanted to thank the Mandalorian but to his great misfortune, he had come to capture him.

Once outside the planet, the Myrthol tries to convince his kidnapper not to deliver him but the bounty hunter just ignored him until his prisoner descended into the lower part of the ship where he discovered with horror others prisoner locked in carbonite before being carbonated himself by the mandalorian. Arrived on Nevarro, Mando went to see the leader of the guild, Greef Karga to collect his bounty. Refusing first the imperial credits which according to him was worth nothing, he obtained Calamari Flan instead and asked for another mission but found that the premiums were not worth much, so Greef offered him an alternative of Mission may be common with a man named "The Client" whom he should meet in person.

Arrived at the meeting place, Mando knocks on the door and shows a magnetic card to the door droids then enters and is escorted by a GNK droid. In the room, The Client accompanied by some Stormtroopers, welcomes Mando mentioning that Greef had informed him about the reputation of the mandalorian. The conversation cut short when Dr. Pershing suddenly entered the room, prompting Mando to point his blaster at him. The Stormtroopers targeted the bounty hunter and despite their numerical superiority, Mando was not intimidated. The Client calmed the conflict and then proceeded to explain the purpose of the mission: to recover a person of about fifty on Arvala-7 by promising that the reward will be a huge amount of Beskar, even offering a brick of this same metal to the bounty hunter.

Mando then went to the enclave where the tribe lived and gave the beskar to the gunsmith so that she could forge a new Pauldron for him. During the making, Mando had flashbacks from his childhood the day the separatists attacked and killed his parents.

Once on Arvaka-7, he scanned the area before being suddenly attacked by Blurrgs until an old Ugnaught was crested with darts, saving the Mandalorian to whom he asked if he was a bounty hunter, which Mando confirmed. The Ugnaught took Mando to his home and introduced himself as Kuiil. Kuiil then informed the mandalorian that he had helped other bounty hunter in the same mission and that none of them survived.Advised by Kuiil, Mando tries to ride a Blurrg but after some failure, he gives up but tries again when Kuiil reminds him that his ancestors knew how to ride the Mythosaur and finally succeeded in taming it.

On Blurrgs' back, they cover several kilometers of gorge and crevasse to arrive at the camp where the target of the mandalorian is. Halfway, Kuiil indicates the rest of the way to go before returning home but before he leaves, Mando wants to pay him for his help but Kuiil declines his offer, considering that if Mando gets rid of the mercenaries, peace will return to his valley and will be sufficient payment.

Arrived at the site, Mando crossed paths with another member of the guild, the assassin droid IG-11. After a bad start, the two bounty hunters agreed to collaborate and share the bounty. Once all the mercenaries were eliminated, they entered the hangar and IG-11 detected a single form of life which turned out to be a young child aged fifty due to the biology of his species, as well as the target . IG-11 is about to eliminate the kid but Mando shoots him quickly in the head.

In "Chapter 2" Mando brings his target back to his ship but on the way, three trandoshans attack him by surprise. He succeeds in killing one of them, which forces the other two to flee. Unfortunately for him it is not the last of his problems, when he finds Jawas stealing pieces of his ship and managed to escape with it.

Stuck on this world, Mando returns to see Kuiil who reveals to him that he knows where to find the Jawas and that he will be able to negotiate with them, despite the fact that the Mandalorian is skeptical about it. After a rainy trip, the two travelers find the jawas, whose language Kuiil knows speak and the negotiation begins. The Jawas first demand the beskar, which is out of the question for Mando who tries to say in their language that its stolen parts belong to him only so that the Jawas laughs at mediocre mastery of their language, comparing him to a Wookie. Annoyed, Mando almost burns the mocking Jawa until Kuiil calms him down and succeeds in finally finding an agreement with the thieves.

To recover his stolen pieces, Mando must recover an Mudhorn egg, gigantic and violent creatures. Arrived in the cave of the beast, Mando accidentally awakens the creature which with a powerful blow of the horn pierces his coat of arms for beskar. While the Mudhorn charges the bounty hunter, the mysterious child uses force to lift the beast which gives Mando time to stick his knife into the Mudhorn's neck.

After recovering his pieces and with the help of Kuiil, Mando repairs his ship. He offers to Ugnauth to become his partner but Kuiil politely declines, declaring to have worked all his life to escape from servitude. Mando then offers him his gratitude and Kuiil does the same to thank him for bringing peace to his valley.

Mando and The Child

Mando in the cantina of Mos Eisley 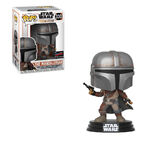 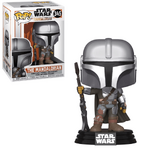 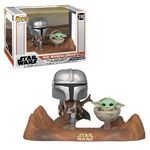 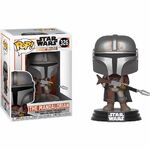 Retrieved from "https://disney.fandom.com/wiki/Din_Djarin?oldid=4332069"
Community content is available under CC-BY-SA unless otherwise noted.