A Poem Is...
Adventures in Wonderland

Too much nonsense, Alice leaving her

Alice
Alice's Sister
Dinah is a small red kitten and a character in Disney's Alice in Wonderland. She is the cat of Alice and her sister.

In the film, Dinah is Alice's cat. She is first seen sitting with Alice in a tree and listening to Alice's sister read from a history book. Alice then makes a crown out of flowers and puts them on Dinah's head, crowning her the flower girl cat. Then Alice's sister tells Alice to pay attention to her history lesson. Alice refuses to because the book has no pictures in it and tells her sister that in her world there would be books with nothing but pictures in it. Her sister believes this is nonsense. When Alice hears this, she picks up Dinah and tells her that in her world everything would be nonsense, because everything would be what it isn't. For example, animals would talk and live in houses because Alice's World would be a "Wonderland." Suddenly, Dinah and Alice spot a White Rabbit with a coat on and a pocket watch and they chase after him to the Rabbit Hole. Alice falls down into it and waves goodbye to Dinah as she falls.

Dinah is later mentioned by Alice at the Tea Party with the Mad Hatter, the March Hare, and The Dormouse which frightens him when he hears that Dinah is a cat causing a large fuss over it.

Dinah is finally seen at the end when Alice awakens from her dream where she sleeps on her apron (she was also seen sleeping on her before she wakes up). Alice picks her up and takes her home for tea along with Alice's sister.

Alice with Dinah, by Mary Blair.

Alice and Dinah by David Hall.

Dinah with a crown of daisies on her head

Dinah seeing a reflection of the White Rabbit

Dinah watching Alice fall down the rabbit hole to Wonderland

Dinah waving goodbye to Alice as she falls into the pit 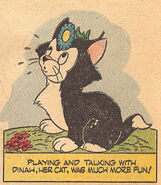 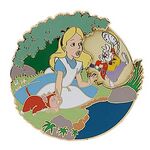 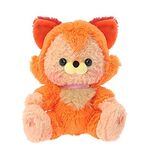 A plushie of Dinah from Disney's Kiss Me! Cat line.