The Pluto series and various others

She appears as Pluto's girlfriend although she sometimes dates Butch the Bulldog as well. She first appeared in The Sleep Walker, and made appearances in several other cartoons: Canine Casanova, In Dutch, Pluto's Heart Throb, Wonder Dog, Pluto's Arrow Error, Presto Pluto, and Pluto's Magic Paws. It is shown that she had puppies of her own, in The Sleep Walker and Canine Casanova. She also appeared in the House of Mouse episode Big Bad Wolf Daddy.

Dinah's debut in The Sleep Walker 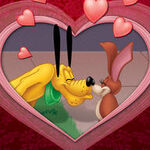 Dinah with Pluto and Goofy in House of Mouse