Disney Wiki
Register
Don't have an account?
Sign In
Advertisement
in: Objects, Those destroyed, Once Upon a Time objects,
and 4 more

House of Mouse
Once Upon a Time
Descendants: Wicked World

To comb one's hair (according to Scuttle)

To eat food with (true purpose)

The Dinglehopper (a.k.a. the fork) is an artifact from the sunken ship which Ariel and Flounder explore early in The Little Mermaid. It is in fact a fairly ordinary object, but Ariel prizes the dinglehopper, as it is an artifact of the human world. Due to his lack of knowledge of the human world, Scuttle gives this strange name to the object rather than the more-accurate "fork."

While exploring the sunken ship near the beginning of the film, Ariel encounters an item that has been noticeably spared the decay which has befallen every other object therein. The object is small and probably made of silver (or perhaps tin) due to its resistance to corrosion and the fact that stainless steel had not yet been invented. Attracted to this pretty and clearly-human tool, Ariel places the object in her bag and protects this bag even to the point of risking her life.

Scuttle, whom Ariel and Flounder consult after their discoveries, identifies this object as "the dinglehopper." According to him, it is used to comb the hair and thus achieve an aesthetically-pleasing appearance. Due to its shine, purity, and connection to the human world, Ariel displays the dinglehopper in a candelabra between a knife and a spoon in her undersea grotto. Once Ariel's grotto is uncovered by her father, however, it is presumably destroyed by King Triton, along with most of the other objects therein.

Upon arrival at Eric's castle, Ariel later discovers the dinglehopper is an eating utensil, a three-tined fork, when presented with another one while dining with Prince Eric and Sir Grimsby, to her minor embarrassment.

Later, the Evil Queen reveals herself before them and orders Ariel to leave, stating that Snow White is going to die whether Ariel decides to go to Prince Eric or stays with her friend. Ariel begins to leave but then stabs the Queen in the neck with the same fork, distracting her while she takes the bracelet off Snow that turned her into a mermaid.

The dinglehopper makes a brief cameo in the opening sequence of House of Mouse, where Ariel is briefly seen combing her hair with it.

The dinglehopper also makes a cameo in Pocahontas.

In the Descendants: Wicked World episode "Pair of Sneakers", Mal uses a fork, possibly the dinglehopper, to clear some cobwebs behind a shelf or a chest of draws.

In Ralph Breaks the Internet, when the Disney Princesses of Oh My Disney discoveres Vanellope von Schweetz in their room, the Netizen version of Ariel uses the dinglehopper as a weapon to use on their intruder. Just as she was about to use it, Vanellope reassures the princesses that she isn't a threat and is a princess herself.

Princess Ariel takes in the majesty that is the "dinglehopper".

Scuttle attempts to identify the dinglehopper.

"Wouldn't you think my collection's complete?"

Triton fires an energy bolt from his trident at the candelabra holding the dinglehopper.

Destiny of the dinglehopper.

The Dinglehopper in Descendants: Wicked World 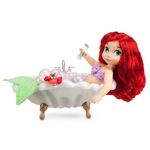 Ariel is the Princess of Bathtime, for which purpose she employs a dinglehopper! 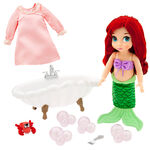 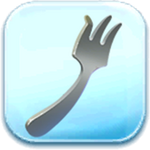 Ariel, Rapunzel, and Elsa brandish their weapons of choice.