Dinoco is an oil company/gas station that has been seen in the Disney/Pixar Toy Story and Cars film series. In the first Toy Story, the logo is an Apatosaurus. In the Cars Universe, the logo is a Tyrannosaurus Rex (though Cars 3 also reuses the Apatosaurus). At Disney California Adventure, the Cars Land also features Dinoco gas pumps at Flo's V8 Cafe, which features a Stegosaurus as the logo on the pumps.

Every set offered an opportunity and a challenge. The test for the neighborhood Dinoco station was to replicate the style and sheen of the classic 1950s gas station, while adding just the right touch of harsh light, oil stains, and cement texture to make it believable.

“Buzz Lightyear mission log. The local sheriff and I seem to be at a huge refueling station of some sort.”
―Buzz Lightyear[src]

The Dinoco Gas Station is the place where the Davis's Family Van stops for some gasoline en route to Pizza Planet. It is where Woody (whom Andy has chosen to take with him to Pizza Planet) and Buzz Lightyear (who has followed Woody to avenge him for pushing him out of the window at Andy's house) get stranded as a result of their argument and misunderstanding of each other. The Pizza Planet truck also happens to stop by at the gas station (Woody labels the Pizza Planet truck as a spaceship to convince Buzz to tag along), allowing Woody to find his way back to Andy.

A Dinoco tanker truck also stops at the station after Andy's car leaves and before the Pizza Planet truck arrives.

Dinoco is an oil company run by Tex Dinoco that sponsors the Piston Cup and is the main sponsor of Strip "The King" Weathers. Every Piston Cup race car covets the Dinoco sponsorship. In Cars, Strip Weathers is on the verge of retiring, causing Lightning McQueen and Chick Hicks to both battle for the Dinoco sponsorship. In the final race for the Piston Cup, Chick Hicks deliberately sent "The King" crashing off the track, after being fed up with coming second to him in every race. Lightning gave up his bid for the sponsorship as well as the Piston Cup to help "The King" cross the finish line with dignity, making Chick the ultimate winner due to McQueen having realized that friendship is important than winning even at the cost of not earning the Piston Cup. Although Chick Hicks selfishly "won," he was labeled a cheater by the enraged crowds and media who saw his stunt, and apparently, Tex refused to sponsor him as he believed he is too dirty to become their next racer. Tex offered to sponsor Lightning instead for his sportsmanship, but he quietly turned it down, deciding to stay with Rust-eze. He does, however, ask Tex for a helicopter ride for his friend Mater. With "The King" retired, it is uncertain who Dinoco is now sponsoring, though at some point between the first and third films, Cal Weathers, who is Strip Weathers’ nephew, becomes the new Dinoco racer.

Dinoco is based on the NASCAR, IndyCar, and airplane fuel corporation called "Sun-Oco", although Sun-Oco sponsors all NASCAR teams and drivers as primary fuel, not just one driver.

As the Dinoco oil company is an important brand in the movie Cars, it reappears in Cars 2. It is the drink Lightning and Mater have in the plane taking them to Tokyo. An advertisement for Dinoco can be seen in Tokyo. It is also seen as the fuel of the 12th Pit for the last race of the WGP in London.

Dinoco reappears in the third movie sponsoring Cal Weathers in the Piston Cup, with Strip acting as his crew chief. In the 2016 season, Cal races with Lightning McQueen and Bobby Swift, even becoming friends with them and pulling pranks at each other. One race had Cal beat McQueen by a close second. Despite Dinoco sponsoring Cal, Tex still wanted to offer McQueen the Dinoco sponsorship. When new racers such as Jackson Storm enter the racing world, Cal decides to retire, leaving the Dinoco sponsorship open once again. Following the victory of McQueen and Cruz Ramirez, Tex offers to sponsor Cruz, of which she accepts. He also buys Rust-eze at the end.

During the family RV road trip, Bonnie's family stops at a Dinoco gas station. A vintage neon Dinoco sign is seen in the background of Second Chance Antiques.

Dinoco on the mud flaps of the truck in Toy Story

Cruz Ramirez at the end of Cars 3, sponsored by Dinoco 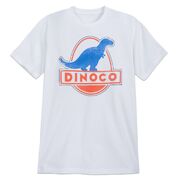