The original Dionysus, the Greek God of wine

God of Parties, Merriment and Wine

Eating, partying, the Muses, having fun

People impugning his honor as a god.

Dionysus plays a very minor role in the film usually only appearing in cameos.

At the beginning of the film, he is present for the party celebrating Zeus and Hera's newborn son, Hercules. Eighteen years later, Hades unleashes the Titans on Mount Olympus and imprisons all the Gods, including Dionysus. Luckily, they are all saved by Hercules. Near the end of the film, he is seen celebrating Hercules' arrival after having gained his Godhood, but when Hercules decides to live as a mortal on Earth with Megara, Dionysus still celebrates Hercules' decision, even opening a bottle of wine in celebration of the new couple.

Dionysus plays a much larger role in the series and even acts as the main force behind the plot in one episode.

In "Hercules and the Bacchanal", Hercules asks Dionysus if he can liven up things at his party which is being held at Phil's Island, to which he full-heartedly agrees. The party eventually gets out of control when Dionysus begins destroying some of Phil's belongings.

In "Hercules and the Golden Touch", after Midas, the king of Phrygia, did an act of kindness for a friend, Dionysus rewarded him by granting him the ability to turn anything he touches into gold. This, however, turned the king into a mad and greedy king whose lust for gold made him create a plot to turn the whole world into gold by using Hercules' connection with the Gods to steal Hermes' magic shoes so he could turn the world to gold in a faster time. After he accidentally touched his daughter and turned her into gold he realized the error of his ways and prayed to Dionysus to rid him of his curse which he did. 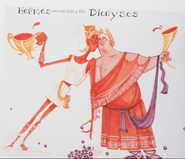