Guns handling, intimidation ability
Dirty Bill is a bulldog featured in the film The Robber Kitten. He is a great bandit and the authorities are always in his search. Despite acting alone and not having a gang, he is very feared by the townsfolk due to his taste for violence. While he is looked for, he falls on Ambrose whom he takes for a real bandit and invites him to make a criminal duo. Ambrose tells him a false story where he extorts money. Dirty Bill betrays Ambrose and extorts his bag money (in fact, cookies); Ambrose finally finds out how dangerous and scary is it to be friends with a robber and runs away. Dirty Bill gets confused upon finding there wasn’t any money in the bag. The fate of Dirty Bill remains uncertain. He is voiced by Billy Bletcher. 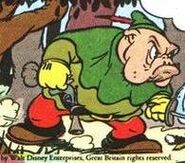