Disney Wiki
Register
Don't have an account?
Sign In
Advertisement
in: Unbuilt Disney parks and attractions, Themed areas in Disney parks, Society of Explorers and Adventurers,
and 4 more

Discovery Bay was an unbuilt land for Disneyland designed by Tony Baxter in the late 1970s. Set in a technologically advanced late 1800s San Francisco, attractions based on 20,000 Leagues Under the Sea and The Island at the Top of the World were prominent features.

While working on Big Thunder Mountain Railroad in 1979, Tony Baxter was considering ideas for what to do with the rest of the old Nature's Wonderland space and a story for what could be done with all the gold in the mountain. The Jules Verne inspired film, The Island at the Top of the World, inspired plans for an area built around a theme of Victorian science fiction. Besides the land, there was a proposal for a companion television miniseries entitled The Discovery Bay Chronicles that would have starred Pete Renaday as Discovery Bay founder Jason Chandler that would have told the story of the land. However, the failure of the film and the growing popularity of science fiction over fantasy adventure led to the project getting shelved. The concept was briefly reconsidered in the late 1990s for placement on the northern part of a divided Tom Sawyer Island, a plan that would result in the permanent docking of both the Mark Twain Riverboat and the Sailing Ship Columbia and conversion into restaurants. This plan would ultimately fall to the wayside as a result of the negative reception to the 90s Tomorrowland overhaul and the company's focus on Disney's California Adventure. The plot of land that Discovery Bay would have occupied is now used by the east side of Star Wars: Galaxy's Edge.

Some of the ideas proposed for Discovery Bay found their way into other projects and parks. These included:

Much of Discovery Bay was tied into the original backstory of Big Thunder Mountain Railroad. As described in a 1992 issue of Disney News:

"The highly imaginative tale includes the legend of a young inventor, named Jason Chandler, who lived in a town called International Village during the peak gold rush years in the Big Thunder region-circa 1849. According to the chronicles, “…the young inventor devised a drilling machine with the capability of boring into the very heart of Big Thunder Mountain. There, the veins of gold ran so deep, it was rumored they could produce a mother lode that would bring a man enough wealth to last a hundred lifetimes and more.

But a cave-in occurred on Big Thunder, burying 26 miners alive. They would have drawn their last breath then and there, had it not been for the inventor and his laughable drilling machine. He burrowed down into the Earth’s core, rescuing the miners from certain death. It should have been a moment of joy and celebra¬tion, but as the men scrambled to the arms of safety, a massive earthquake shook the ground and a cavernous maw opened up, swallowing the inventor and his machine whole. “The miners, as well as the citizens of the village, struggled day and night against the mountain, trying to dig the young man from his living tomb. But they never saw him, or another nugget of gold, again. Big Thunder had taken its vengeance not only on the miners, but on their wealth as well. The mountain had gone bust, and it became just a matter of time before only ghosts resided there."

Unknown to everyone else, Jason Chandler survived the incident but knowing the wealth of gold could easily be abused, chose to use the gold to fund research for any inventor whose odd ideas had been turned down by everyone else. He established a new home on the California coast near San Francisco called Discovery Bay and amongst these first adventures was a meeting with Ned Land to locate and salvage the Nautilus from its watery grave.

The exterior of Professor Marvel's

A scale model of the park by Tony Baxter

Close up showing the Hyperion and Nautlius 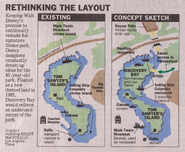 Sketch of the 1998 version of Discovery Bay by Christopher Merritt
Community content is available under CC-BY-SA unless otherwise noted.
Advertisement