Treasure Island (1974-1978)
Not to be confused with the Animal Kingdom area of the same name.

Discovery Island was a zoological park lying on an island in the middle of Bay Lake, behind Disney's Contemporary Resort at Walt Disney World. It was closed shortly after the opening of Disney's Animal Kingdom.

The island had a history long before Disney's involvement. It was originally known as Raz Island, named after the family that once lived on it. Later it was bought out and named Riles Island and used as a hunting retreat. Then in 1965, Disney bought it as part of its strategic property acquisition, which would later become Walt Disney World.

When the park opened on April 8, 1974, it was given the name Treasure Island, with boats offering free passage to its docks. Prior to the decision to fully commit to developing it as a zoological park, concepts were drawn for experiences based on the Treasure Island film featuring caves of treasure and encounters with ghostly pirates. However, beyond location names, the only element that would make it to the park was a shipwreck set up on the beach. The shipwreck was utilized as a set in the film Treasure of Matecumbe.

It had nature trails to show off endangered species which the island helped repopulate. After its recognition as a zoological park it was renamed Discovery Island in 1978 and most of the pirate elements were removed. The island was known as the home of the last dusky seaside sparrow before it died in 1987. When Disney's Animal Kingdom opened in 1998, it was decided that Discovery Island had outlived its usefulness and the park closed to guests on April 8, 1999. Over the next few months, the island's animals were moved to Disney's Animal Kingdom and the park's central hub, originally named Safari Village, was rebranded to Discovery Island in tribute to the original park and as a response to early guest confusion over the location of the Kilimanjaro Safaris attraction. The move was completed on July 9, 1999 and the island has sat abandoned ever since.

There was only one plan to bring it back: Disney teamed up with the developers of Myst to develop a cutting edge experience known as Myst Island; however, the plans never got through the concept stage.

The structures on the island can still be seen today, but are very hard to see due to the overgrowth of vegetation. The island itself can easily be seen from the upper floors of Disney's Contemporary Resort and Fort Wilderness Lodge.

View of the island from the air.

Map of the original Treasure Island version of the park 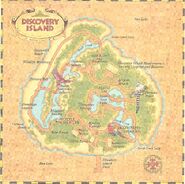 Map from late in the Island's lifespan