The All-Star Movies Resort is a Value Resort at Walt Disney World. The last of the three All-Star Resorts to open (the other two being All-Star Music and All-Star Sports), opening on January 15, 1999, the resort utilizes themed elements from several Disney films to decorate its hotel buildings. This and the other All-Star Resorts are located on the southern portion of the property, not too far from Blizzard Beach and Disney's Animal Kingdom. 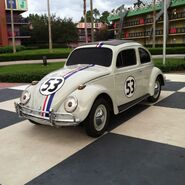