Year-round
Disney's Animal Kingdom is one of four theme parks at the Walt Disney World Resort. Built on a theme taking inspiration from the many cultures around the world, circling around a central animal message, the park's icon is the magnificent Tree of Life, into which is carved a massive array of animals, insects, and fauna.

Plans for the park were originally released in 1995, and ground-breaking began soon after. The park opened on Earth Day (April 22) 1998, and is the largest of the four theme parks in the Resort, due to the large expanses of man-made savanna and animal habitats in the north of the park.

"Welcome to a kingdom of animals... real, ancient, and imagined: a kingdom ruled by lions, dinosaurs, and dragons; a kingdom of balance, harmony, and survival; a kingdom we enter to share in the wonder, gaze at the beauty, thrill at the drama, and learn."

The Oasis is the Main Street, U.S.A. of Animal Kingdom. Guests first enter this land after entering the park. Here, guests are surrounded by animal exhibits featuring birds and other animals as well as realistic rock work until they are greeted by a view of the Tree of Life.

Themed around the southwestern continent, the Africa area is home to Pangani Forest Exploration Trails as well as a train to Rafiki's Planet Watch. You can also find the insanely popular Kilimanjaro Safaris in Africa. This area also became the new home of the popular Festival of the Lion King stage show in the summer of 2014 (retitled A Celebration of Festival of the Lion King in 2021), following the closure of Camp Minnie-Mickey (which is permanently closed).

Rafiki's Planet Watch is the only land that is not connected to Discovery Island, it is instead connected to Africa. The land is named after Rafiki, a character from the 1994 Disney film The Lion King. Attractions in the land include Wildlife Express Train and walkthrough attractions Habitat Habit!, Conservation Station, and Affection Section.

Currently famous for the new Expedition Everest roller coaster. Asia also contains the new restaurant The Yak and Yeti. Themed around a town near Tibet, Asia, Asia also contains Kali River Rapids, Flights of Wonder (which is permanently closed to make way for UP! A Great Bird Adventure in 2018), and the Maharajah Jungle Trek.

Containing the controversial Chester and Hester's Dinorama, Dinoland USA has evolved into a diversified area within the park. Encompassing Finding Nemo: The Musical (which is temporarily closed to make way for a "reimagined" version of the show as Finding Nemo: The Big Blue... and Beyond!, which will open in 2022), Dinosaur, TriceraTop Spin, and Primeval Whirl (which is now permanently closed), Dinoland USA contains a wide variety of attractions. Dinorama's theming is often under fire from Disney fans due to its theme of a cheap carnival in what is usually an impeccably-themed complex.

An area themed to the world of Pandora from James Cameron's Avatar films. It opened in summer of 2017.

Camp Minnie-Mickey was the main character greeting area of the park. It was also home of two stage shows: Festival of the Lion King and Pocahontas and her Forest Friends. The area was originally slated to become Beastly Kingdom with the Camp serving as a temporary placeholder, but those plans were never realized. The Camp closed for good in January 2014 to make way for a new area, which would eventually become Pandora: The World of Avatar.

A 2002 guide map featuring the Festival of the Lion King 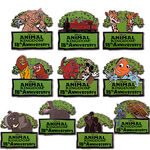