The resort is a value resort and is fifth one of the category to be made right after All-Star Sports, All-Star Music, All-Star Movies, and Pop Century.

The resort opened in May 2012 with the first theme from Finding Nemo, followed by Cars suites, Lion King suites, and finally Little Mermaid standard rooms.

The Finding Nemo has the largest pool in all of Walt Disney World.

The land the resort was built on was originally planned to house more rooms for the Pop Century Resort, themed to "the Legendary Years" (1900s, 1910s, 1920s, 1930s, and 1940s). While the other half of the resort flourished, this half was abandoned due to the tourism halt after the 9/11 attacks.

While the "Legendary Years" idea was abandoned, Disney began to prepare for a new resort on the land in January 2010. Disney officially announced the idea later in May and began construction that summer.

In the main building, in addition to the check-in desk, there are two other establishments. One is Landscape of Flavors, the food court; the other is the Ink and Paint shop, a general store of sorts.

The theme for the resort was later designed "with families in mind". It was decided later that the resort would showcase the art of animation and feature four popular Disney and Disney•Pixar animated movies: Finding Nemo, Cars, The Lion King, and The Little Mermaid.

Much like the other value resorts, the Art of Animation features giant versions of items and characters built in the resort's exterior, such as a 35-foot (11 m) model of King Triton. The resort has 1,980 rooms; 1,120 of them are family suites holding up to 6 people and the other 864 have the standard value layout. Unlike the other value resorts, each room is tied to a specific movie theme, with artwork from the film also featuring in the hallways.

The courtyard of the Finding Nemo area is scaled to put guests at Nemo's perspective and size. The area is home to the resort's main pool, the Big Blue Pool. The Big Blue Pool is the largest hotel swimming pool on the Disney property. Special underwater speakers allow the voices of the characters to be heard within the water. In addition to the pool are play areas featuring Squirt and Nemo's classmates. A large Mr. Ray and Crush are featured along the buildings on either side, as are schools of Jellyfish.

For the Finding Nemo rooms, suites are speculated to feature decals of the school of Moonfish from the movie. A master bedroom with a queen size bed and an anemone headboard. Two pull-out beds, one from the couch and one from the desk. Two bathrooms with curtains displaying the sharks. A standard couch, a mini kitchen, flat panel TV, and an ocean-themed desk. The Finding Nemo suites opened on May 31, 2012 to the public.

The Cars suites try to recreate the Cozy Cone Motel from the movie and feature many similar qualities. The suites feature framed screenshots from the movie. A master bedroom with a queen size bed. Two pull-out beds, one from the couch and one from the desk. Two bathrooms with a flashing sign signaling the sink. A standard sofa, a mini kitchen, flat panel TV, and wood-colored desk covered in bumper stickers.

The building complex itself features numerous locations from Radiator Springs, including the facade of the Wheel Well Motel serving as one of the entrances, with full-scale figures of the residents throughout the area. The pool is themed to the Cozy Cone, with the cones serving as first-come, first-serve cabanas. Also, travel/car-themed music is played constantly at the pools.

A laundromat is also featured next to the pool. The Cars suites opened on June 18, 2012.

The exterior of the Lion King's buildings are scaled for guests to be at young Simba's perspective. At one of the entrance points is Pride Rock, with Mufasa overlooking the area and Rafiki closer to the ground. The log bridge from "Hakuna Matata" with Timon, Pumbaa and Young Simba is towards the center of the courtyard. A play area based on the Elephant Graveyard with caves and the elephant skull features Shenzi, Banzai, and Ed perched on the rocks above, while Scar sits on a rock nearby.

The Lion King suites recreate the jungle setting of the film and filled with detail. They feature decals of various birds and giraffes. A master bedroom with a queen size bed and a headboard with leaves and a decal of Zazu. Two pull-out beds, one from the couch and one from the desk. Two bathrooms that include a shower themed to the sunrise scene from the movie. A standard sofa, a mini kitchen, flat panel TV, a desk that looks like a tree, and multiple curtains with grass and leaves. The lion King suites opened on August 10, 2012.

The Little Mermaid rooms, similar to the Finding Nemo rooms, are made to look like the ocean, though the contrasting art direction and animation medium allow them to stay distinct. While its neighboring resort buildings are completely family suites, The Little Mermaid rooms hold the distinction of being standard rooms, like those of the other value resorts, the result of The Little Mermaid section being repurposed from the buildings that were finished for the cancelled Legendary Years Resort. The walls feature decals of Flounder, Sebastian, and an octopus. Two beds with flower sheets. A bathroom with curtains displaying the ocean floor. A framed screenshot from the movie, and a standard desk. This section opened on September 15, 2012.

On the outside, there are 4 playful courtyards, one for each film, and 3 shimmering pools. The play areas each recreate scenes from the movies and dazzle you with the giant character statues. The Finding Nemo area is specifically geared towards the kids and bears many water-squirting fountains. Also on the exterior is the sketchbook motif and the simple line drawings that reflect on the resort's name and theme which simply celebrates the art of animation. 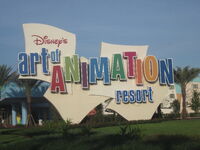 Sign at the entrance to the Art of Animation Resort 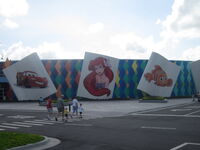 Exterior of Animation Hall, central hall of the resort 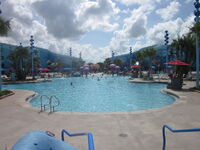 Swimming pool within the Finding Nemo section of the resort 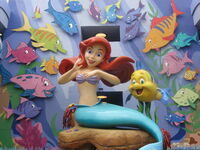 Construction of the giant Triton