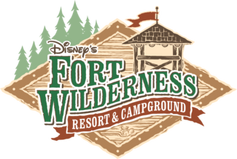 Disney's Fort Wilderness Resort & Campground is a themed camping resort within Walt Disney World near Orlando, Florida. The site officially opened on November 19, 1971. Fort Wilderness is designed with a rustic theme with tree-lined winding roads which loop around to the various regions. Part of the resort is filled with campsites, where visitors with tents or recreational vehicles can stay. The remainder of the lodging area is filled with cabins, which are designed to look like log cabins.

From 1973 through to 1980, Fort Wilderness featured a 3½-mile long steam-powered railroad (titled the "Fort Wilderness Railroad") that provided transportation around the resort grounds to campers and guests visiting the nearby River Country water park. The railroad was removed in the early 1980s. Some of the track is still in place around outlying areas of the campground.

The resort hosts two dinner shows, the Hoop-Dee-Doo Musical Revue and Mickey's Backyard BBQ. Other amenities include playgrounds, two heated swimming pools, a buffet, the Trail's End Restaurant, as well as other activities, such as fishing, horseback riding, and a 2.3 mile paved and sand exercise trail that runs from the petting farm to the Wilderness Lodge. There are showers, a laundry room, restrooms, and a newspaper outlet located in the Comfort Station on every loop.

The campground features a free nightly Campfire Sing-Along with Chip and Dale where a Disney Cast Member leads songs in an outdoor amphitheater while the characters Chip 'n Dale go to seated audience members, signing autographs and posing for photos. Two firepits are available for roasting marshmallows and making s'mores. Guests may bring their own marshmallows and roasting sticks or kits can be purchased at the snack shop. Following the sing-along, a Disney movie is shown on an outdoor screen. Also at night, the Electrical Water Pageant passes the beach and marina.

It is a fully equipped campsite with 4 types of sites that are provided with tents to at least 45-foot or longer RV's, with 10 Guests maximum per site. Privacy enhancing landscaping, water, cable TV, electrical hook-ups, picnic table, and grill are available on each campsite. Fort Wilderness offers a pet friendly policy.

On October 27, 2020, Since Walt Disney World reopened, after being temporarily closed during the ongoing COVID-19 pandemic, Walt Disney World announced that all recent entertainment shows are laid off, such as Citizens of Hollywood at Disney's Hollywood Studios and Monsters, Inc. Laugh Floor at Magic Kingdom, due to a dispute between the Actors' Equity Association and Walt Disney World.[1][2]

Retrieved from "https://disney.fandom.com/wiki/Disney%27s_Fort_Wilderness_Resort_%26_Campground?oldid=4300359"
Community content is available under CC-BY-SA unless otherwise noted.