High School Musical: The Ice Tour was a Disney On Ice show which made its debut in 2007 and ran around the United States and the world until 2009.

On this spectacular ice show, we see Troy Bolton, captain of the basketball team, and Gabriella Montez, a beautiful and shy transfer student who excels in math and science. Together, they try out for the lead parts in their high school musical.

The following stories represented in this show:

Kristen Treni as Sharpay Evans in the East Coast version

Amanda Billings as Gabriella Montez in the East Coast version 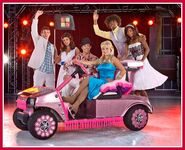 West Coast Cast
Add a photo to this gallery
Retrieved from "https://disney.fandom.com/wiki/Disney%27s_High_School_Musical:_The_Ice_Tour?oldid=3090209"
Community content is available under CC-BY-SA unless otherwise noted.