Not to be confused with Hollywood Pictures.

“'The World you have entered was created by The Walt Disney Company and is dedicated to Hollywood—not a place on a map, but a state of mind that exists wherever people dream and wonder and imagine, a place where illusion and reality are fused by technological magic. We welcome you to a Hollywood that never was—and always will be.'”
―Michael Eisner, May 1, 1989

The park was originally intended to be a pavilion at the Epcot, which was to be called "Great Moments at the Movies" with the Great Movie Ride as its main attraction. This would have been located between The Imagination and The Land pavilions, before it was suggested to dedicate an entire park about filmmaking. The park would also function as a working studio with soundstages and production facilities for films and television and a new Florida unit for Walt Disney Animation Studios, which in addition to working on projects supervised by the main Burbank studio, would produce three of their own films including Mulan, Lilo & Stitch, and Brother Bear. Reflecting the active studio focus, the park's icon would be a old-fashioned studio watertower decked out with Mouse Ears named the Earffel Tower. Through the various tour attractions at the park, this would allow guests a up-close look at how film production worked, though by the early 2000s, active entertainment production had essentially ceased and many production areas would be consumed by guest traffic and new attractions. A list of the park's productions can be found here.

To bolster the park's image and pool of films to draw inspiration from, Disney would establish a loose partnership with Metro-Goldwyn-Mayer (MGM). The only affiliation that MGM, now under the ownership of Sony, had to the Disney park was via contracts which allowed Disney to use the MGM name and lion logo in marketing, and separate contracts that allowed for specific MGM content to be used in a ride called The Great Movie Ride. However, rights for the entire pre-1986 MGM library were purchased by Ted Turner to create Turner Network Television and later, Turner Classic Movies, which in turn has become part of Time Warner. Therefore, the end of the MGM affiliation did not affected the content of The Great Movie Ride. On January 7, 2008, the park was rebranded "Disney's Hollywood Studios" with the official announcement made on August 9, 2007 by Disney officials. With the ongoing expansion work that began in 2015, it has been reported that Disney has been exploring new names for the park.

The park, originally opened under the conception of being a "half-day experience" to be paired with other new projects such as Typhoon Lagoon and Pleasure Island, would open to overwhelming success and drive a need for expansion in the years to come. The "Disney Decade" initiative included many proposed lands and attractions for the park such as Dick Tracy's Crime-Stoppers, Roger Rabbit's Hollywood, and The Great Muppet Movie Ride, though none of these would come to pass with many of these park plans being scaled back after Disneyland Paris's rough opening. In 1994, Sunset Boulevard, the first major expansion to the park, would open with The Twilight Zone Tower of Terror and eventually be joined by Rock 'n' Roller Coaster Starring Aerosmith in 1999. Additionally, as part of 2001's 100 Years of Magic celebration, the park would serve as the main host of the celebration with the Sorcerer's Hat icon that would replace the Earffel Tower in marketing as the park's icon for the next 14 years. In 2015, a new major expansion was announced that would demolish what remained of the park's unused production facilities and backlot, with Toy Story Land opening in 2018, Star Wars: Galaxy's Edge opening in 2019 and Mickey and Minnie's Runaway Railway opening in 2020.

On October 27, 2020, Walt Disney World reopened after being temporarily closed during the ongoing COVID-19 pandemic, but Walt Disney World announced that all entertainment would be laid off (at least until the summer of 2021), such as Citizens of Hollywood at Disney's Hollywood Studios and Monsters, Inc. Laugh Floor at Magic Kingdom, due to a dispute between the Actors' Equity Association and Walt Disney World.[1][2]

A 2010 Guide Map featuring The Twilight Zone Tower of Terror

A 1995 guide featuring The Twilight Zone Tower of Terror, Beauty and the Beast Live on Stage, Star Tours, and Genie from Aladdin.

The characters of the park in 1990 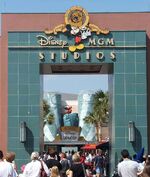 2021 Concept Art for a new look of Tower of Terror's Beacon of Magic at the World's Most Magical Celebration in Walt Disney World's 50th Anniversary celebration.