It is notable for being the final production in which Robin Williams voiced Genie. It also reunited him with Mork & Mindy co-star Jonathan Winters.

Disney's Math Quest with Aladdin in an entertaining game that will teach players the fundamentals of Math so painlessly that they won't even know they are learning.

The plot of the game involves assisting Aladdin, Jasmine, Genie, Iago, and Abu in their quest to defeat the evil genie Bizarrah. Along the way, they meet up with the spirit of Very Ankh-Amman, who aids in the quest.

Players start off in the Dungeons of Agrabah's Sultan's Palace. First, they must retrieve the chisel from the Spider's web. The Spider insists that you feed the young spiders with bugs. Players must find which bugs the spiders will accept by placing them in the web. Correct bugs are kept, while incorrect ones are kicked out of the web. Only by finding four, five or six (depending on the level) correct bugs will the player get the chisel.

They must then chisel their way through the plaster covering the numbered stones beneath. Some stones are blue, and some are gray. Players must click two gray stones and then a blue stone that equals the total of the numbers on the gray stones. When all the stones are gone, players find themselves in the marketplace.

Here, players must rescue Jasmine from the enchanted Mosaic she is trapped in by completing the mosaics using the stones given. Players must construct mirror images of the pattern on one side of the screen. Once the player has completed the required number of mosaics, they can click on Jasmine's picture to free her.

Next, players must free Abu, who has been trapped in Wacky Wakeem's Trading post. Wakeem will give players a plate of lemons, and make them trade to get Abu free. Players put their items to trade on the trading plate and click what they want to trade them for. When the players have the correct items to trade, Abu is free.

Then, players must seek out the Potion shop of the dead Pharoah Very Ankh-Amman. Here, players are told one step at a time which gems must be used to make the magic potions. Players must add gems in the correct amounts, then click on the lightning medallion. When all the potions have been made correctly, the vortex opens, and players can try to rescue Aladdin.

Aladdin, Jasmine, Abu and Carpet go off to beard Bizarrah in her lair, and you and the rest go to the magic carnival travel to retrieve the missing pieces of Bizarrah's lamp.

To do this, they will need to win tickets against the Carnival games. Players must win both the piece of the lamp and the token. Carnival games include Square Up, where players try to build a square before their opponent by using marbles on a board, Magic Number Card game, where players must arrange the cards on the bowls to make the magic number, Missing Numbers asks players to click on the correct numbers when they flash on the number board, Rebuild the Temple asks players to rebuild the columns to the exact same height by using the broken pieces, Geonim has players build a figure using geometric pieces, and whoever plays the last piece is the winner, and finally, Bug Out asks players to catch the crickets in the nets provided and refill the jar using only full nets of crickets.

Each of these activities awards a certain number of colored tickets. When players have enough to get the items they need, it is time to move on to the Fortune Teller's tent.

Players now move on to Very Ankh-Amman's flying pyramid. To get through the door, players will have to place the triangles into the pattern to fill the empty spaces. When they succeed in getting the triangles to fit, the door will open.

In Guardian's Necklace, players must add jewels to the necklace so as to continue the patterns already there. These games are also repeated on a later level as Lizards and Jewels and Lizard's Necklace.

Now, only one obstacle remains... the attribute bridge. Here, players must chart a course across the bridge, picking pictures whose color and shape are separated by a number of attributes equal to the playing level (one attribute at level 1, all the way up to three at level 3).

This is a game that makes learning math easy and fun. Some players might be a bit intimidated by Iago's comments, especially if they are younger. 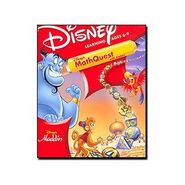 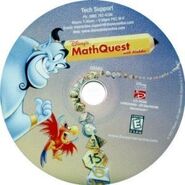