Disney's Newport Bay Club is a hotel situated at Disneyland Paris. It was designed by architect Robert A. M. Stern (who also designed Disney's Hotel Cheyenne) and styled after archetypal New England architecture with its blue and white clapboard exterior, porches, woodwork and nautical memorabilia. Its name was derived from the town of Newport, Rhode Island. Restaurants feature seafood and the hotel itself is built in a crescent shape around one extreme (or the "bay") of Lake Disney, which itself features a small lighthouse. It is the largest hotel on property and at the time of its opening held more rooms than any other hotel in Western Europe.

The hotel opened with the Euro Disney Resort in April 1992. In this same year, the hotel was temporarily closed during the winter due to the low occupancy the resort hotels suffered during their early years. The hotel has not ceased operation since.

The hotel was temporarily closed for renovations in early 2014 and re-opened in spring 2016. 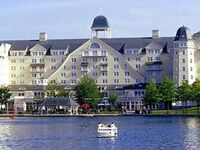 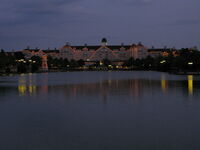