Disney's Polynesian Village Resort is a Polynesian-themed hotel on the shores of Bay Lake at the Walt Disney World. It is located near the Magic Kingdom and has its own Walt Disney World Monorail station. Since its opening in 1971, the resort has seen two major expansions; the first in 1978, with the addition of a longhouse, the Tangaroa Terrace restaurant/support facility, and a secondary pool. A second expansion took place in 1985, with the construction of two additional longhouses. In that same year, the resort shortened the name to simply the Polynesian Resort. The resort had a collective 847 rooms and suites, after a recent renovation in 2006.

In 2014, the Polynesian Resort underwent a significant renovation and restored the original Polynesian Village Resort name alongside the opening of Disney Vacation Club villas and bungalows.

In 2021, the resort will undergo further reimagining, with changes to the arrival area, Great Ceremonial House roof, and an update of the hotel guest rooms to a Moana-influenced design.

In 2022, Walt Disney World Resort announced that Disney's Spirit of Aloha Dinner Show was permanently closed to make way for a new DVC expansion at Disney's Polynesian Village Resort, since the project of Reflections - A Disney Lakeside Lodge had been cancelled.

The resort is organized around a central building named the Great Ceremonial House, itself designed after a Tahitian royal assembly lodge. The Great Ceremonial House houses guest services and most of the resort's dining and merchandise locations. The Great Ceremonial House also featured a large tropical rain forest in its atrium, with over 75 species of plant life and several waterfalls. No rooms are contained in this building, instead, several lodges, longhouses, house all guest rooms and are spread out amongst resort property. Additionally, copies of the Tiki statues from Walt Disney's Enchanted Tiki Room could be found scattered across the grounds. During the 2014 renovation, however, the iconic waterfalls were removed for wider guest space, a better view of the Seven Seas Lagoon through the lobby, and a significantly smaller waterfall fountain featuring a sculpted tiki figure based on the resort's mascot, Maui.

As of 2008, Disney's Polynesian Village Resort is a certified green lodging property with the state of Florida.

The resort used United States Steel's then newly-developed construction process for its original longhouses; steel frames were erected on-site, and pre-constructed modular rooms were lifted into these frames via crane, similar to Disney's Contemporary Resort. This method of building caused problems in both Disney's Polynesian and Contemporary Resorts, with guest complaints of a moldy smell in their rooms. It was found that mold and debris had collected in the spaces between each room. The spaces were filled in, stopping the problem, and Longhouses built as part of the resort's later expansions were built using conventional building techniques.

The resort design and layout consists of 11 two and three-story longhouses, spread throughout the property. The resort originally opened with 8 longhouses: Bali Hai, Bora Bora, Fiji, Hawaii, Maui, Samoa, Tahiti, and Tonga. In 1978, the Oahu longhouse was added. The Moorea and Pago Pago longhouses were added in 1985.

Two of the current longhouses, Hawaii (formerly Tonga) and Tonga (formerly Tahiti), offer a Concierge Lounge - where refreshments, views, and lounge space are offered exclusively to guests of Hawaii or Aotearoa. Hawaii arguably offers some of the best views of Seven Seas Lagoon in Walt Disney World.

All standard guest rooms contain two queen beds, a daybed, a lounge chair and table, a combination dresser and entertainment center with a flat screen television, a desk with an integrated rolling table and matching chair, two closets, and convenience area between the closets for a small refrigerator and a coffee maker. Bathrooms typically include a single or dual-sink vanity, western toilet, and a bathtub. As of 2012, most guest rooms offer free wireless Internet access.

The resort's guest rooms make use of earth tones such as brown, green, and red; and are influenced by a modern interpretation of the resort's original South Seas theme. The resort has some of the largest standard rooms on Walt Disney World Resort property (for rooms in original longhouses, for rooms in newer longhouses), matched only by Disney's Contemporary Resort and Shades of Green. All first floor rooms have patios, and all third-floor rooms have balconies. Most second floor rooms have no balconies, with the exception of Moorea, Pago Pago, Tokelau, and Tonga.

With the 2014 updates to the pavilion, 380 Disney Vacation Club villas opened including 20 Bora Bora Bungalows, located along the shoreline and over the water, alongside 360 deluxe studios in 3 fully reimagined longhouses - Tokelau, Moorea (previously Tahiti) and Pago Pago (previously Rapa Nui).

Statue of the Polynesian Village's Maui mascot, introduced in 2014 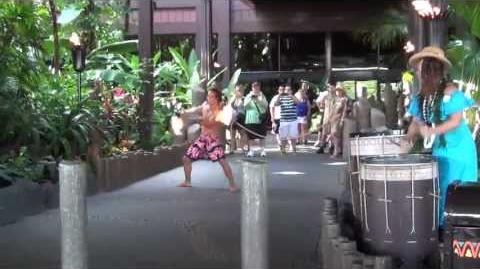