The two resorts are connected to each other and Downtown Disney via the Sassagoula River.

About a quarter of the 2,000 rooms in the "Riverside" section of Disney's Port Orleans Resort are "Royal Rooms."

Beginning March 1, 2001 road signage and other theming began to change reflecting the Disney's Port Orleans Resort and Disney's Dixie Landings Resort properties becoming "regions" of a united Disney's Port Orleans Resort. As of April 1, 2001, the regions became French Quarter and Riverside, respectively. Changes leading up to and after this period would include the French Quarter region losing Bonfamille's Cafe table-service restaurant, bike rentals, and boat rentals. French Quarter region guests would have to use the larger facilities in the Riverside region. Bonfamille's Cafe's is now only used occasionally as a meeting space for food and beverage management, and a training facility. Bonfamille's Cafe's kitchen is Disney World's test kitchen. Other theme changes took place such as Colonel's Cotton Mill food court becoming Riverside Mill.

There are also five smaller 'quiet' swimming pools at Disney's Port Orleans Resort Riverside, three located within the Alligator Bayou section and two in the Magnolia Bend area. Riverside also has a marina where guests can rent personal water craft, bicycles or surrey bikes. Horse-drawn carriage rides are available in the evening.

Both regions have cashless video game arcades where guests purchase point-cards for gameplay. 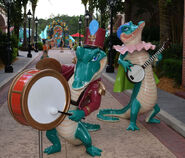 Retrieved from "https://disney.fandom.com/wiki/Disney%27s_Port_Orleans_Resort?oldid=3901724"
Community content is available under CC-BY-SA unless otherwise noted.