Disney's Sequoia Lodge is a hotel situated at Disneyland Paris. It was designed by French architect Antoine Grumbach to evoke the atmosphere of the American National Park lodges built around the beginning of the 20th century, such as the Old Faithful Inn (1904) in Yellowstone National Park and others in Yosemite and other Western National Parks.

The main lodge faces across Lake Disney towards the Disney Village and is home to many of the 1011 guest rooms as well as two restaurants (one of which specializes in grilled meat) and a hotel bar. Behind the main lodge are six smaller lodges, five of which contain the remainder of the rooms while the sixth lodge contains the hotel's swimming pool and leisure facilities. Surrounding the hotel are thousands of trees which were imported from the West Coasts of the United States and Canada, among with hundreds of Sequoias. 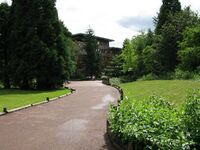