Sing, dance, and play along with your favorite Disney songs! It's fun and easy as you read the on-screen lyrics and join your favorite characters in their most memorable musical moments!

Celebrate the music and learn your favorite songs from Disney's 33rd animated hit, Pocahontas! This colorful musical celebration includes "Just Around the Riverbend" and "Colors of the Wind". Plus, a new "Can You Feel the Love Tonight" montage from The Lion King, "Cinderella Work Song", and other popular Disney songs performed by your favorite Disney characters! 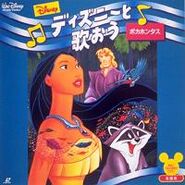 Opening title card to the 1995 VHS release of Colors of the Wind.

Closing title card to the 1995 VHS release of Colors of the Wind.

"Just Around the Riverbend"

"Why Should I Worry"

"Can You Feel the Love Tonight"

"Colors of the Wind"
Add a photo to this gallery

Retrieved from "https://disney.fandom.com/wiki/Disney%27s_Sing-Along_Songs:_Colors_of_the_Wind?oldid=4568974"
Community content is available under CC-BY-SA unless otherwise noted.