Learning the words to your favorite Disney tunes is easy and fun, thanks to your hosts Mr. Owl and Ludwig von Drake! As you thrill to a glorious rainbow of scenes from Disney Classics, cartoons, movies and TV shows, the words to the songs appear on-screen for easy follow-along singing. This volume includes songs from Disney's animated hit film Oliver & Company featuring Grammy award-winner Billy Joel as Dodger. So gather up the family and join some very special Disney friends for great fun, great music and great company. The gang's all ready...Are you?

Songs are for sharing, and learning the words to your favourite Disney songs has never been so much fun! Just sing along to the on-screen lyrics as you enjoy classic Disney characters in their most memorable musical scenes!

Mr. Owl and Professor Ludwig von Drake host this volume of DISNEY'S SING ALONG SONGS, which highlights music from Disney hit movies including 101 Dalmatians. Gather 'round the piano with all the lovable dalmation pups, and learn the words to songs from 101 Dalmatians, Alice in Wonderland, The Aristocats, and many others!

The (Re-Printed) Australian cover of "101 Notes of Fun" 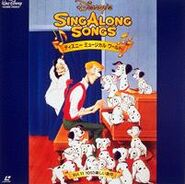 The Japanese VHS cover of "101 Notes of Fun"

"Why Should I Worry?"

"With a Smile and a Song"

"All in the Golden Afternoon"

"While Strolling Through the Park"

"The Green With Envy Blues"

"Old MacDonald Had a Band"

"Scales and Arpeggios"
Add a photo to this gallery

Retrieved from "https://disney.fandom.com/wiki/Disney%27s_Sing-Along_Songs:_Fun_with_Music?oldid=4310052"
Community content is available under CC-BY-SA unless otherwise noted.