Sing, dance and play along with your favorite Disney characters in fun-filled musical moments!

It's the day of the annual Bow-Wow Ball at the Dalmatian Plantation! Pongo, Perdita and Nanny do their best to keep your favorite puppies from Disney's new live-action hit, 101 Dalmatians, out of trouble before their friends arrive for the big party. Features a never-before-released song from Disney's animated 101 Dalmatians. Don't be late-you'll have a ball!

Pongo, Perdita and the puppies prepare for the Bow-Wow Ball, a party for dogs and their owners.

Opening title card to the 1996 VHS release of Pongo & Perdita

The 101 Dalmatian Residence at night 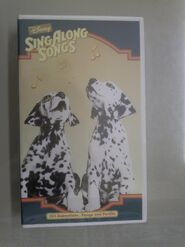