Sing, dance, and play along with your favorite Disney songs! It's fun and easy as you read the on-screen lyrics and join your favorite characters in their most memorable musical moments!

Celebrate a festival of sing-along fun as you learn the words to your favorite songs from Disney's 34th animated masterpiece, The Hunchback Of Notre Dame! It's a bright and lively parade of songs, featuring "Topsy Turvy" and "Out There"-plus "You've Got A Friend In Me" from Toy Story, "Family" from James And The Giant Peach, "Streets Of Gold" from Oliver & Company and more-all performed by the Disney characters you love! 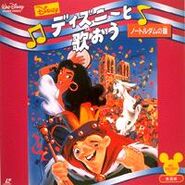 The UK cover of The Hunchback of Notre Dame

The Australia cover of The Hunchback of Notre Dame

The title card for "Out There"

Title card for The Hunchback of Notre Dame

"You've Got a Friend in Me"

"On the Open Road"

Retrieved from "https://disney.fandom.com/wiki/Disney%27s_Sing-Along_Songs:_Topsy_Turvy?oldid=4329864"
Community content is available under CC-BY-SA unless otherwise noted.