“A furious storm once roared cross the sea,
catching ships in its path, helpless to flee.
Instead of a certain and watery doom.
The wind swept them here to Typhoon Lagoon.
”
―Legend of Typhoon Lagoon poem

The park, which opened on June 1, 1989, is home to the world's largest outdoor wave pool.[1]Its theme is the "Disney legend" of a typhoon that wreaked havoc upon a formerly pristine tropical paradise. Ships, fishing gear, and surfboards are strewn about where the storm flung them. Its centerpiece is Miss Tilly, a shrimp boat impaled upon a mountain named "Mount Mayday" that erupts a 50-foot (15 m) geyser of water from its smokestack every half hour, right before the bells of the watch sound on it. Its mascot is Lagoona Gator who is related to Blizzard Beach’s Ice Gator.

For as long as anyone could remember, the quaint thatch-roofed village had nestled along the shores of the sparkling lagoon, in the shadows of a great volcanic mountain. Then came the 20th century with its cruise ships, and tourists, and the Placid Palms Resort...a special little place for lucky vacationers each year.

The great storm, however, changed everything... a furious, unrelenting typhoon catching a small fleet of ships by surprise, and tossing them about like toy boats for one terrifying hour. But in the storm's wake was left a remarkable scene.

A surfboard had penetrated completely through a huge tree. A small boat had blown through the roof of one building. A great buoy had crashed through the roof of still another. The Placid Palms Resort was now the Leaning Palms, almost ready to topple over at any moment. A small harbor had been cut off from the sea, trapping an overturned boat and thousands of colorful fish, uh...plus a few sharks along the way.

Nothing, however, topped the sight of the shrimp boat, "Miss Tilly", impaled precariously on the peak of the great volcanic mountain. To this day, the mountain tries vainly to dislodge its unwelcome burden with an enormous geyser of water every half hour.

Well, what nature has done is a little redecorating. The inhabitants were left with the most extraordinary assortment of waterfalls, rapids, pools, surf, and all-around wetness the world has ever seen. The once sleepy resort had been turned into Typhoon Lagoon. 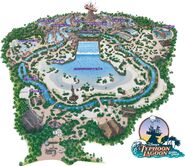 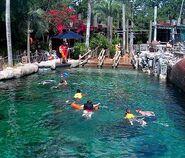