Disney's Yacht Club Resort is a New England nautical-themed resort at Walt Disney World. First opened on November 5, 1990, it is one of several Epcot Area Resorts. Disney's Yacht Club is located next to a sister resort, Disney's Beach Club Resort, and across Crescent Lake from Disney's BoardWalk Resort. It is owned and operated by Disney Parks, Experiences and Products. It was designed by Robert A.M. Stern.

Disney's Yacht and Beach Club resorts share amenities and resources, including staff and management. Boat transportation from the resort runs to Epcot and Disney's Hollywood Studios as well as the BoardWalk and the Walt Disney World Swan & Walt Disney World Dolphin resorts. The resort is about five minutes walking distance from Epcot, and roughly 15 minutes walking to Disney's Hollywood Studios. Guests can use the back entrance to Epcot through the World Showcase between the France and the United Kingdom Pavilions.

The Yacht Club is home to a Convention Center shared with the Beach Club. The resort's distinctive grey siding with red and white striped awnings distinguish itself from the light blue motif of Beach Club.

The Yacht Club is slightly more formal in decor than the Beach Club, designed to make guests feel as if they are actually on a ship rather than inside a land based structure, and to cater more toward business clientele, rather than families. Color tones of deep blues, browns, and bronzes are used to convey a nautical feel. Hidden Mickeys can be found in the carpeting in hallways leading to guest rooms. The Yacht and Beach Club Resorts share one of the nation's largest sand bottom pools, Stormalong Bay. The pool is a "mini-waterpark", featuring a sand bottom swimming pool, lazy river, a large slide from a wrecked ship just outside of the play area on the beach, and even sinking sand.

Yachtsman Steakhouse - A Disney Signature Dining restaurant that serves a selection of steakhouse dishes with a nautical theme in a ship-shaped restaurant layout. It features an open kitchen with a display of aged beef cooked on an oak-fired grill. It serves dinner only.

Captain's Grille (formerly Yacht Club Galley) - A casual dining restaurant with an à la carte menu selection for breakfast, lunch, and dinner and a buffet option for breakfast only. It features similar nautical theming to that of the Yachtsman Steakhouse, but in a more casual atmosphere.

Hurricane Hannah's - A poolside counter-service restaurant that serves mostly fast-food American cuisine along with specialty drinks and other beverages.

Stormalong Bay - The resorts' main pool complex that resembles a beachside water park with its sand bottom pool, a lazy river, waterfall, and the "Shipwreck"; a large replica of a shipwreck with one of the highest resort water slides at Walt Disney World. The pool complex offers a poolside counter-service restaurant and bar, a children's shallow area, and an elevated tanning deck. It is centrally located between both resorts facing Crescent Lake.

Quiet pool - The "quiet pool" is located on the far end of the resort in a garden area.

Lafferty Place Arcade - An arcade located next to the Beaches and Cream Soda Shop.

Ship Shape Health Club - A fully equipped health and fitness center free of charge for resort guests. It is centrally located between both the Beach Club Resort and the Yacht Club Resort and offers fitness equipment, plus a steam room, sauna, and spa. The center also offers massage therapy by appointment.

Bayside marina - The resort's lakeside marina offers a variety of watercraft available for rental including private cruises and fishing excursions.

Disney's Yacht & Beach Club Convention Center is centrally located between the two resorts and features meeting space including two large ballrooms and 21 breakout rooms. It is primarily accessible from the Yacht Club Resort via a covered walkway to its lobby. To access it from the Beach Club Resort, guests must either use an outdoor sidewalk by the bus stop or walk over to the Yacht Club resort to use the covered walkway 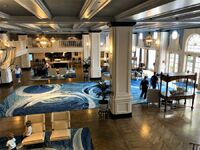 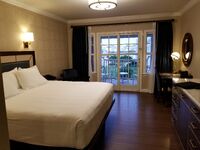 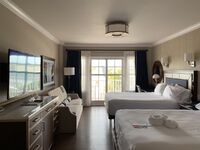