April 26, 2018
Disney·Pixar Toy Story Land is a themed land at Shanghai Disneyland and the third Toy Story-themed land in the parks.

It was announced for the park in November 9, 2016, when Bob Iger, chairman and chief executive officer of The Walt Disney Company, along with Bob Chapek, chairman of Disney Parks, Experiences and Products, and Fan Xiping, chairman of Shanghai Shendi Group, recently celebrated breaking ground on this new expansion.[1]

Toy Story Land at Shanghai Disneyland will be both authentically Disney and distinctly Chinese, making it a one-of-a-kind experience for the guests, located between Tomorrowland and Fantasyland. The toys from the movie franchise will come to life and play in a fully immersive land with three attractions and a themed character greeting area. This will be an experience guests can only have in Mainland China. It will be the perfect setting for all toys to gather together for a day that’s more fun. 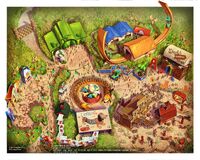