DisneyLife is a multimedia app launched in 2015 for smart devices available in the United Kingdom and in the Philippines in May 2018.

The app acts as a streaming service for Disney movies and television series, and also includes access to official soundtracks, digital storybooks and games.

Before its launch, Disney movies were widely available on Netflix in Europe and the UK, as they were in the United States. This distribution ceased when DisneyLife launched, with the exception of Marvel Television content.

In June 2018, Legend of the Three Caballeros was the first series released in the Philippines on DisneyLife before it was released in the United Kingdom. It is presented as the only DisneyLife original series since Disney+ will make new content in 2019. 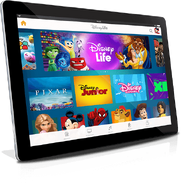