Disney Castle is a world that appears in the Kingdom Hearts series. It is the home of King Mickey, Goofy, Donald Duck, and many other of the classic Walt Disney characters. Surrounding the castle is Disney Town, and first appeared in Kingdom Hearts: Birth by Sleep. The design of the castle, along with the town, is based upon the designs of the Magic Kingdom at Walt Disney World and Toontown in Disneyland.

The world that the castle inhabits was once known as the Timeless River, which appeared in Kingdom Hearts II. Although Timeless River was the past version of Disney Castle and Disney Town before the Castle's construction, classic characters and current residents could be found living there. It is based on Walt Disney's early Mickey Mouse cartoons, especially Steamboat Willie.

Role in the games

Disney Castle first appeared in Kingdom Hearts in cutscenes towards the beginning of the game. Donald goes to greet King Mickey one morning when he finds the throne empty and only a letter in Pluto's mouth. Following orders from the King in the letter and accompanied by Goofy, Pluto, and Jiminy Cricket, he leaves in search of "the key" and the King.

The world is visible on the World Map to the left of Traverse Town, but is inaccessible throughout the game.

During the ending credits, Huey, Dewey, and Louie are seen returning to Disney Castle.

In Kingdom Hearts II, the castle plays a bigger role as it is overrun by the Heartless. Queen Minnie summons Sora, Donald, and Goofy to the castle, and, upon arriving, the Queen takes the trio to the Hall of the Cornerstone, where the Cornerstone of Light is seen surrounded by thorns. Maleficent is revealed to be behind the mess, and she demands Disney Castle be turned over to her or she would destroy the Cornerstone of Light. The trio seeks help from Merlin, who summons a door to Timeless River, a version of Disney Castle from before the castle's construction. Sora, Donald, and Goofy go through the door, where they find the monochrome world and an unprotected Cornerstone of Light at the top of Cornerstone Hill, and the trio try to find the cause of troubles in Disney Castle. They soon learn of the nature of Timeless River, that it is a world in the past, and that events in that world would affect the town in the future, i.e. the present that they had just come from. Along the way, they run across a past version of Mickey, who helps them as they search for the truth. They find that Pete has also gotten access to the world. Under orders from Maleficent, he tries to take the Cornerstone of Light and destroy it so the Castle becomes vulnerable in the present. With help from Pete from the past (which they repeatedly confuse with Pete from the present), they are able to beat Pete from the present out of Timeless River and seal his (the?) door. They return to the Castle in the present, where the thorns have disappeared. From then on, Timeless River is still accessible through the door in the Hall of the Cornerstone.

Later, in the Final Mix version of Kingdom Hearts II, a dark blue portal appears in the Hall of the Cornerstone that leads to the Keyblade Graveyard, where the Lingering Will is found.

During the ending credits, Huey, Dewey, Louie, Pluto, Scrooge McDuck, Donald, Goofy, and King Mickey are seen having returned to Disney Castle. Later, Pete is shown driving his riverboat. Mickey runs to the dock, sees the departing boat, and runs and hops aboard. He then waves at the camera as the boat floats away.

In Kingdom Hearts Birth by Sleep, Terra, Aqua, and Ventus all visit Disney Town, the town surrounding Disney Castle. The Annual Disney Town Dreams Festival is being held at the time, consisting of many games and events and the awarding of the Million Dreams Award, but because King Mickey is training with Master Yen Sid, Queen Minnie is struggling to carry it out on her own. Pete is making things more difficult, disguised as both Captain Justice, a hero, and Captain Dark, a villain.

Terra arrives in Disney Town first, and begins to chase after Unversed that appeared on the Rumble Racing track, only to almost get run over by Pete, disguised as Captain Dark, saved only by a warning from Queen Minnie. The Queen and Chip and Dale reprimand Terra, who tries to explain that rules don't apply with the Unversed. However, the Queen insists that if Terra wants to chase down the Unversed on the track, he should do so without breaking the rules, and they suggest he enter the races. Once the race is over, Terra realizes that he doesn't have to break the rules to get what he wants, and notices that he also doesn't have to give into the darkness to achieve his goals. Chip and Dale pledge their votes for the Million Dreams Award to Terra.

Ventus arrives in Disney Town next. He is initially greeted by Pete, posing as Captain Justice. However, he is interrupted by Huey, Dewey, and Louie, who are trying to make ice-cream using a machine Scrooge McDuck had left behind. Ventus attempts to and successfully helps the trio, who pledge their votes for the Million Dreams Award to Ventus.

Aqua is the last to arrive in Disney Town. She hears Horace Horsecollar ask for help, to which Pete, disguised as Captain Justice, arrives to promote himself as a hero. However, when Horace asks for help from Pete to deal with the Unversed at the Fruitball court, Pete makes excuses and runs away. Aqua volunteers to help out with the trouble. To do so, Aqua must play Fruitball against the Unversed. Upon succeeding, Queen Minnie appears to thank her, and Horace introduces Aqua to the Queen. The Queen explains to Aqua the Dream Festival, and Horace pledges his vote for the Million Dreams Award to Aqua.

Following this, Queen Minnie and the other residents of Disney Town are seen at the Ice Cream tent, where the Queen presents the Million Dreams Award to Terra, Ventus, and Aqua. Hearing this, Pete storms onto the stage, demanding a recount, sure that he had received all the votes. However, despite showing up in both his disguises, he receives no award, and the Queen calls for his arrest. The Magic Brooms appear and carry Pete off the stage and out of Disney Town.

During the ending credits, Huey, Dewey, and Louie are seen racing in the Rumble Races. Huey wins the race with Queen Minnie, Horace Horsecollar, Pluto, Chip and Dale watching and cheering in the sidelines.

In Kingdom Hearts Re:coded, Jiminy is seen reviewing his empty journal from their first journey, and finds a new message that he didn't write. King Mickey asks Chip and Dale to construct a device to digitize the journal, and, along with Donald and Goofy, they begin to oversee Data-Sora debugging the journal so that they can identify the source of the message. Pete sneaks into the Castle and is spying on the group as they debug the journal. At some point, Mickey, Donald, Goofy, Jiminy, and Pete are sucked into the journal along with a copy of the Disney Castle Library. Because they are inside the journal, Heartless appear in the digital version of the Castle's Library, which Mickey quickly destroys. A digital version of Riku appears, revealing that he brought them all in to help him figure out why the bugs are there, and informing them that they must debug the journal in order to return to the real Disney Castle.

When the debugging is complete, Mickey is seen writing a letter to Sora, Kairi, and Riku about his findings in the journal, and about the hearts connected to them, referring to Roxas, Xion, Naminé, Terra, Aqua, and Ventus.

In Kingdom Hearts 3D: Dream Drop Distance, Maleficent and Pete are able to break into Disney Castle and kidnap Queen Minnie. Maleficent sends her raven, Diablo, with the Queen's crown and a letter to Yen Sid's Tower, demanding that Mickey return to the Castle. Master Yen Sid advises Mickey to return at once, and once he is gone, Yen Sid notes that Maleficent would only do something this drastic if she felt a change in the darkness, such as the return of Xehanort. Once Mickey returns with Donald and Goofy, Maleficent demands that Mickey hand over the Castle to her, which Mickey refuses, knowing Maleficent wants something else. It is then that she reveals that she knew of Xehanort, and that thanks to him, she began her quest to take over the worlds. Maleficent then orders the data of all the worlds from the datascape Mickey traveled in the journal in Kingdom Hearts Re:coded. When he refuses, Maleficent attacks, but is stopped thanks to a sudden entrance from Lea. His attacks distract Pete long enough for Minnie to escape. With their leverage gone, Maleficent and Pete leave Disney Castle.

Disney Castle appeared at the near end of Kingdom Hearts III. Minnie, Daisy and Pluto appeared waiting for Mickey, Donald and Goofy to arrive.

Artwork of the castle's exterior

Artwork of the starting track for Disney Town's races. 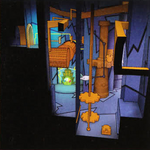 The Building Site in Timeless River.

The toy cannon in the center of Lilliput.

The Scene of the Fire.

The vortex in Mickey's House.