Disney Cinemagic was a channel available in the United Kingdom and Ireland, which launched on March 19, 2006, replacing the UK version of Toon Disney, and proceeded to launch throughout Europe in later years as well as Australia. It also had a timeshift service called Disney Cinemagic +1. Despite the name, Disney Cinemagic has no formal connection with the CineMagic children's film festival based in Belfast, UK.

In the UK and Ireland, Disney Cinemagic ceased broadcasting at midnight on March 28, 2013 and was effectively replaced with Sky Movies Disney, as part of a multi-year film output deal between BSkyB and The Walt Disney Company.

In 2019, Disney announced plans to pull the German feed of the channel (also the last remaining one) off Sky Germany and closed on September 30, 2019.

The channel was unavailable outside of Europe.

The original UK incarnation of Disney Cinemagic showed regular screenings of Disney movies, typically three to four each day, the movies were, with very little exception, the cinematic releases such as those from the animated canon and the live action material, as well as their direct-to-home video films. Cinemagic did not show movies from the Disney Channel Original Movie library with the one rare except of the first two High School Musical films, which were shown in conjunction with the channel premier of the third film. During the channel's run, all Disney movies would have their UK TV premiere on the channel.

Disney Cinemagic also showed the archives of classic Disney Cartoons and Disney animated television series. From the beginning of its run, the television shows broadcast were entirely those that were spun off from the movies in the animated canon, such as the Aladdin series, Lilo & Stitch: The Series, and The Legend of Tarzan, as well as the shows that starred the Mickey Mouse characters, such as House of Mouse, Ducktales, and Goof Troop. In the later half of the channel's run, several of Disney's original animated television series, such as Recess and Kim Possible, would also begin to be shown.

On September 3, 2007, the channel received new branding, including a new logo and continuity graphics.

Unlike its counterparts, Disney Channel and Playhouse Disney, its movies were sometimes shown in their original aspect ratio though these are usually available only on cable. Notable exceptions were Tarzan II, Pocahontas II: Journey to a New World and Bambi II, which have only been broadcast in fullscreen, instead of their proper 16:9 ratio. Films in the 2.55:1 ratio, such as Lady and the Tramp[1], are cropped to 16:9, the only exception being The Incredibles. Disney Cinemagic eventually abandoned this process of showing 16:9 films in their original ratio, favouring prints in pan-and-scan due to the availability of widescreen on digital platforms.

Disney Cinemagic HD launched on Sky+ HD on Monday December 1, 2008 on EPG channel 631. The channel was available to Directv customers who had Disney Channel and Disney XD.[2]

The channel was also launched in France on September 4, 2007 (including one hour timeshift Disney Cinemagic +1), replacing Toon Disney on French satellite platform CANALSAT, making way for the expansion of the brand elsewehere. [3] A version in HD (High Definition) launched in France on November 30, 2007. In Spain and Portugal, the channel was launched on July 1 and October 1, 2008 respectively and ceased broadcasting on January 1, 2015 and November 1, 2012, respectively. The decision to close the Spanish feed was met with much anger online.

The final active Disney Cinemagic channel, on Germany, was replaced with Sky Cinema Special on 30 September, 2019, thus bringing an end to the Cinemagic brand after 13 years. It ended with the film Zenon: Girl of the 21st Century and a message thanking viewers for their loyalty.

These films were shown for Christmas on Cinemagic:

In between showings of films, Disney Cinemagic also aired some of Pixar's short films. shorts that have been aired are:

Disney Cinemagic brought back the Movie Showdown (after Disney Channel ceased broadcasting this show years ago), where viewers could go to the Vote page on the website and choose one of two selected films before Saturday at 9am.

A original and early Disney Cinemagic Logo, between March 2006 and September 2007. 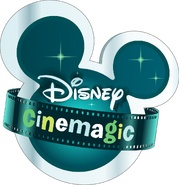 An updated and final Disney Cinemagic logo, from September 2007-2019. An alternate version of the logo (as shown on the infobox), from 2012-September 30, 2019, uses different texture/shading, and used only on some promos. 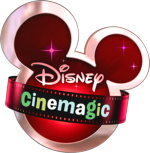 A red version of the Disney Cinemagic logo, used only on the Premiere ident, as well as on the Movies at Five promo. 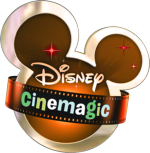 An orange version of the logo. 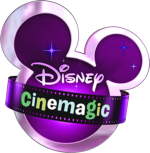 A purple version of the logo.