Following the demise of the Disney Comics line, Disney went back to licensing out their properties to various US comics publishers, while continuing to publish comics in the since-defunct magazines Disney Adventures and Disney Adventures Comic Zone, as well as numerous book projects. They eventually reentered the periodical comics market through their 2009 purchase of Marvel Entertainment (though most Disney comics are instead currently licensed to IDW Publishing and Dark Horse Comics).

Prior to 1990, the only Disney-published Disney comics were the ones published in Italy, after Disney Italia took over from Mondadori in 1988.

In its first eighteen months, Disney Comics published ten regular monthly titles listed below. With the exception of long-runners Walt Disney's Comics and Stories and Uncle Scrooge, all the existing titles had their issue numbering reset to #1.

In addition to the regular line-up, Disney Comics also published giant-sized seasonal specials during its first two years - Autumn Adventures, Holiday Parade, Spring Fever, and Summer Fun. Only two issues of the first two titles were published, and only one issue was printed for each of the latter two titles. All of these titles would not be published by any other company, with the exception of Spring Fever being revived by Gemstone Publishing in 2007-2008.

In this period, plans for expansion were announced. At one Comic Con panel, slides of a realistic European barbarian strip were previewed as one of many new titles in development. One planned imprint, Vista Comics, would showcase superheroes, many to be adapted from Disney films such as Tron and The Scarecrow of Romney Marsh, and was being developed by comic book writer and animated TV story-editor Martin Pasko. A second imprint, Touchmark Comics, was actually announced, with former DC Comics editor Art Young at its head. Among the scripts Touchmark acquired was Enigma by Peter Milligan and Sebastian O by Grant Morrison.

Editor-in-Chief Len Wein's Marvel Comics-esque approach to the Disney characters was met with criticism by many older Disney fans. The hiring of Wein has been championed by the comic book creative community as an alternative to the much disliked former Marvel Comics Editor-in-Chief Jim Shooter, who had made a favorable impression when interviewed by Disney management.[5] Prior to the launch of the comics division, Disney management proclaimed their intention to quickly become a dominant presence in the comic book market, competing with industry leaders DC and Marvel.

These unreasonable expectations, coupled with poor sales, led to a mass cancellation of most of the titles in 1991. Echoing what had been called the DC Implosion of the 1970s, Duckburg Times editor Dana Gabbard dubbed this "the Disney Implosion". The three titles that featured Donald Duck as a regular character - Walt Disney's Comics and Stories, Uncle Scrooge, and Donald Duck Adventures - were the only surviving titles.

Following the implosion, the three Duck-centric titles continued being published alongside the digest Disney's Colossal Comics Collection and an occasional mini-series based on a TV show or a movie. These included:

New Adventures of Disney's Beauty and the Beast
2 issues
(1992)

All plans for expansion, however, were cancelled. Editor Art Young moved back to DC, and many of the unpublished Touchmark titles were published as part of its new Vertigo imprint. Wein left and Marv Wolfman concentrated on being comics editor of Disney Adventures. In a mini-renaissance, editors Bob Foster, Cris Palomino, and David Seidman brought an appreciation of the classic Disney characters to the three continuing titles. Foster especially after a lifetime of involvement with Disney comic books and strips specialized in reprinting rarities even seasoned fans were unaware of. The Disney Studio finally decided to shut down its comic book publishing division in 1993.

While Disney covered regular publication of their comics staring in 1990, Gladstone Publishing, the previous holder of the license, was granted a new license to publish a series of softcover albums aimed at the collectors market, reprinting the stories of Carl Barks in color. After Disney Comics shut down in 1993, Gladstone regained the regular comics license for the classic Disney characters, which they resumed publishing until 1998, while Marvel Comics obtained the license for the modern Disney characters in 1994 and published them until they were forced to file for bankruptcy in December 1996 and sold their rights to Acclaim in 1997. Gargoyles and Tron were licensed to Slave Labor Graphics in the 2000s, while Dark Horse Comics published a few comic adaptations of Disney movies from 1999 to 2004. In 2003, Gladstone reformed as Gemstone Publishing and once more published comics with the classic characters until 2008. From 2009 to 2011, Boom! Studios held the license for the classic cartoon characters for both new and reprint material, along with new material licenses for various Pixar and Muppet projects (which were later moved to Marvel). Checker Publishing Group holds reprint licenses on comics material that Disney purchased from Crossgen. As of 2017, the comic license for the Mickey Mouse, Donald Duck, and Silly Symphonies characters, along with Tangled, the 2017 DuckTales, and the The Disney Afternoon titles[6] is held by IDW Publishing, while all of Disney's other animated properties have been licensed to Dark Horse Comics. 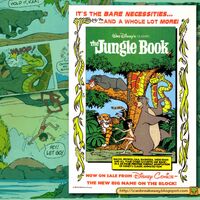 This subscription form appeared midway through the imprint's first year

The Rescuers Down Under Graphic Novel (August 1991)

This ad showed off the now-downsized Disney Comics output. (December 1991)