“Disney Dreamlight Valley is a hybrid between a life-sim and an adventure game rich with quests, exploration, and engaging activities featuring Disney and Pixar friends, both old and new.”
―The game's synopsis

Disney Dreamlight Valley, also known as just Dreamlight Valley, is an upcoming roleplaying video game published by Gameloft. It will feature locations, characters, objects, and cameos from various Disney and Pixar films. It was announced on April 27, 2022 and is expected to launch sometime in 2023. Early access will be available September 6, 2022.

The game will feature several characters based on Disney and Pixar films. The game will also feature a customizable and creative avatar. 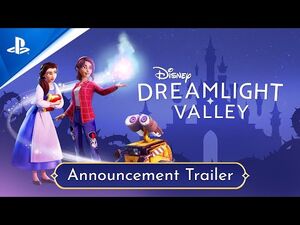