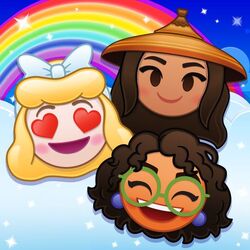 The following is a list of all emoji groups required to complete missions while playing Disney Emoji Blitz.

Most characters fall into either the Girl or Boy categories; however, there are ten characters that do not lie on either: Alien, Sugar Bowl, BB-8, R2-D2, C-3PO, Magic Carpet, The Fire Spirit, Ping, Stormtrooper, and Death Trooper. On the other hand, the only characters that lies on both categories are Mrs. Nesbit and Little Oysters.

There are five color tags for missions: Blue, Green, Purple, Red and Yellow. Although some characters might be identified to be of certain color, they will only count towards achievement of missions if the color tag is enclosed in the game’s coding. For example, Flounder might be considered to be Yellow due to his body color and Blue due to the color of his fins; however, prior to the 38.1 update, he was coded only as Yellow and could not be used to complete missions that require a Blue emoji. He is now counted as blue as of the 38.1 update.

The color of the eye pupils of each emoji is not considered among the color tags.

There are only two characters that lie on all color categories: Rainbow Mickey and Rainbow Unicorn.