September 15, 2016 (North America)
Disney Enchanted Tales was a mobile game featuring worlds and characters from Beauty and the Beast, Tangled, Frozen, and Aladdin. It was discontinued on April 30, 2017.

With the wave of a magic wand, your wish is granted to create your very own enchanted kingdoms. Connect with beloved characters like Belle from Beauty and the Beast, Elsa from Frozen, and Rapunzel from Tangled! Build living kingdoms with magical landmarks, collect classic and new story moments, and earn magical rewards! Bring Disney stories to life on your very own patchwork of enchanted tales.

After 8 months of operation, Disney announced Enchanted Tales would close down on April 30, 2017 with Disney saying in part "the game did not attract the audience we hoped it would, and as a result we plan to focus our efforts on new games for our fans and community."[1]

During it's last month, no in-app purchases could be made and in-game currency was easier to get. 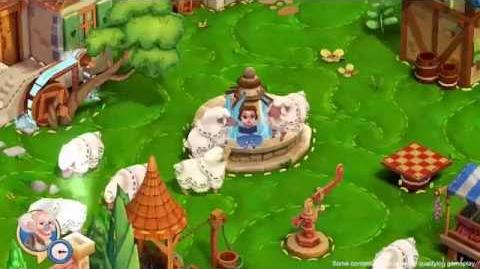