The Disney Junior Encyclopedia of Animated Characters is an encyclopedia on Disney animated characters, including some from Pixar. It was released on July 21, 2009, followed by an updated release in 2014.

Did you know that Thomas O'Malley, the alley cat from The Aristocats, is actually named Abraham DeLacey Giuseppe Casey Thomas O'Malley? Or did you realize that Mickey Mouse has had many different careers, including firefighter, astronaut, detective, and truck driver? You will discover this and more in the brand-new, updated paperback edition of Disney Junior Encyclopedia of Animated Characters! Go from Abu to Zazu ... with stops at Lightning McQueen, Tinker Bell, and WALL-E along the way. Get fun facts, tricky trivia, and cool quotes from the animated stars you've come to know and love. Find out when they made their debut, what films they have appeared in, what are their most famous character traits, and much, much more! 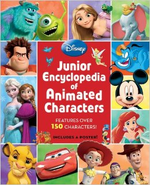 Add a photo to this gallery
Retrieved from "https://disney.fandom.com/wiki/Disney_Junior_Encyclopedia_of_Animated_Characters?oldid=3809895"
Community content is available under CC-BY-SA unless otherwise noted.