Disney KiteTails is a daytime lagoon show at Disney's Animal Kingdom that began performances at the Discovery River Theater on October 1, 2021 as part of the Walt Disney World 50th Anniversary event.

The DinoLand viewing area of the theater is the primary viewing area, while most of the Asia side is used as a staging area and landing spot for the character balloons. Different shows focused on different sets of characters play throughout the day, while sharing a pre-show with smaller kites, windcatchers, and puppets based around aquatic characters from Finding Nemo and The Little Mermaid.

Hearts and imaginations will soar as incredible kites and windcatchers dance through the air to the beat of beloved Disney songs during this high-flying performance at Disney’s Animal Kingdom theme park. Be awed by elaborate, three-dimensional kites of Simba, Zazu, King Louie, Baloo and more as they take flight above the Discovery River Amphitheater. 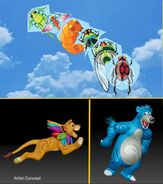