In the first version of Disney Magical Dice, players are able to dress up as popular Disney characters, and travel around the game board, building structures, including Disney-themed landmarks. The game includes multiple maps.

Disney Magical Dice allows players to play in a level-based practice mode against Disney characters, and win their costume cards as rewards. In addition, the game offers two real-time multiplayer modes (free-for-all and a two-on-two team mode), and features three different classes for players to choose from; Rookie, Minor, and Major.

The second version of the game uses figures of Disney characters instead of costumes but maintaining the basic gameplay of playing of a game board and building landmarks. There are four different modes, with two single-player and two multi-player. The two multi-player modes are 1v1 and 2v2. 1v1 puts the player against another person in the world. 2v2 allows the player to play with a friend or a random partner against two other players. The two single-player modes are Saga and Daily Challenges. Saga allows the player to play against an AI and completing objectives to get a prize by obtaining three stars in the battle. Daily Challenges vary by board with a certain benefit added in the gameplay.

Introduced with the Zootopia update on November 9, 2017

Tier levels work as the ranking system of the game and is determined by the amount of trophies a player has obtained. With all the arena tiers, there are also three subtiers. Characters and items are unlocked in certain tiers.

Introduced in the Zootopia update, Clubhouses are guilds that players can join in order to participate in group events. 30 members are allowed for each Clubhouse. Restrictions can be set by the chairperson of the group.

Party with the Villains

This event introduced Maleficent, Captain Hook, Cruella De Vil, and Ursula as players can obtain these characters through Halloween chests, event Daily Challenges, and figure boxes. Originally meant to last for four weeks, it was extended to six weeks with two weeks dedicated to the additions of Cruella De Vil and Ursula.

This Daily Challenge event was released to tie-in with the Zootopia additions in the game, particularly the character additions of Judy Hopps, Nick Wilde, Gazelle, and Bellwether. Players go against Judy and Nick on the Fantasyland board and the player must choose one of the Normal Arena 1 characters (except for Vanellope) to use in the event.

This Daily Challenge event serves as a tie-in to Mickey Mouse's 89th birthday. Players go against Mickey and Minnie (as one figure) on the Mickey and Friends board and the player must choose one of the Normal Arena 1 characters (except for Vanellope) to use in the event.

Promo for the first version

Logo of the first version 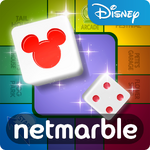 Logo for the second version of the game from August 24 to November 8, 2017 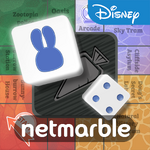 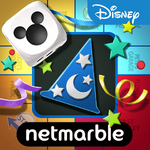 Logo for the second version of the game from November 16 to November 29, 2017