Disney Mirrorverse is an upcoming crossover mobile role-playing game. The game features evolved and amplified versions of Disney and Pixar characters and combines RPG with combat and fighting gameplay.

In this all-new, visually stunning adventure, players will assemble a team of powerful guardians that have been exclusively crafted and imagined for the Mirrorverse. Unrelenting forces threaten to take over this alternate reality, and players must get ready for battle, defeat an evil threat, and embark on a journey to defend the Mirrorverse. 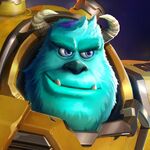 A legion of Disney heroes and villains