Disney On Ice is a touring ice show produced by Feld Entertainment under agreement with the Walt Disney Company. Aimed primarily at children, the shows feature Disney characters in performances that each derive their music and plot from elements collected from various Disney films and properties; the "stars" of the show are credited as the Disney characters themselves. The productions began on July 14, 1981, under the name Walt Disney's World On Ice. The name was changed to Disney On Ice in late 1997.

Disney on Ice currently runs eight to eleven productions and touring companies at any given time. The shows have played all over the world, including non-traditional skating regions like South America, the Middle East, and Asia, as well as more traditional markets such as North America, Australia, and Europe.

As of 2020, the shows have been cancelled to the COVID-19 pandemic. However, it resumed on November 6, starting with Dream Big.

Soon after Mattel's Irvin & Kenneth Feld Productions purchased Ice Follies and Holiday on Ice in 1979, the company approached Disney about doing a Disney-related show on ice. Feld Productions licensed the rights to Disney material for ice shows. In 1981, they began productions under the name Walt Disney's World on Ice.

In March 1982, Irvin & Kenneth Feld purchased back Feld Productions from Mattel including Ice Follies/Walt Disney's World on Ice. In 1986, Walt Disney's World on Ice made its international debut in Japan with Happy Birthday Donald. In 1988, the company had five touring shows. The name was changed to "Disney on Ice" in 1998. By 2008, a new show is launched every year.

Join Mickey Mouse and his gang in searching for clues using Captain Hook's treasure map through realms involving various stories such as Frozen, Aladdin, Beauty and the Beast, The Little Mermaid, the Toy Story series, and the latest two, Moana and Coco.

As the title suggests, this show, debuting in 2014, retells the story of Anna and Elsa in their Oscar-winning animated feature film. The Philadelphia Inquirer in a review called it "probably Disney on Ice's best yet. The cast encouraged audience participation, which only added to the charm."[1]

Previously known as Rockin' Ever After, Magical Ice Festival, and Reach For The Stars, this show debuted in 2012. It has a twist on fairy tale fun, favorite Disney characters compete to be the next superstar in comical segments leading up to the tales of show-stopping princesses – Ariel, Rapunzel, Belle and Merida from Disney-Pixar's Brave in her ice debut! Frozen has since replaced Brave.

Previously known as Live Your Dreams and Dare to Dream. Celebrate what's possible as the adventures of five daring Disney heroines spark the courage inside us all at Disney On Ice presents Live Your Dream! In her Disney On Ice debut, see how far Moana will go when she embarks on an action-packed voyage with mighty demigod Maui in a quest to save her island, become a wayfinder, and find her own identity. Anna’s devotion to her estranged sister Elsa sets her on a perilous journey to mend their bond, and stop an eternal winter. Rapunzel breaks out of her tower and teams up with an unlikely companion, Flynn Rider, as she goes to great lengths to realize her dream. Armed only with courage, Belle befriends the enchanted castle staff and learns to look beyond the Beast’s rough exterior. With help from her friends and a little magic, Cinderella is determined to make the wish in her heart come true. Hosted by Mickey, Minnie and introduced for this show Carmen, discover why no dream is too big when we find the strength to shape our own destiny at Disney On Ice presents Into the Magic!

Show debuted in September 4, 2009 as Let's Celebrate (also known as Celebrations! and Let's Party), the show was "one big colossal party on ice". It began with Lumiere welcoming the audience to celebrate various holidays such as a "Very Merry Unbirthday" with Alice and a royal ball with the Disney Princesses, a Halloween haunt with Jack Skellington and several of the Disney Villains, and a winter wonderland with Mickey and Minnie. Starting on September 2, 2016, the show was renamed to Follow Your Heart where Frozen, Brave, Finding Dory and Inside Out characters were added. Throughout the show, Mickey, Minnie, Goofy, and Donald and even the emotions discover their personalities, hence their names, through various Disney film segments. Starting with the Japan tour in 2018, the show was retitled Mickey's Super Celebration, Moana was added to the show and this version focuses on Mickey himself instead of Riley. On November 1, 2019 the show was retitled Celebrate Memories. The show was later retitled to Mickey and Friends.

Opened on August 21, 2008 as Worlds of Fantasy. It is a show that takes you into four Disney Fantasies. The first act of the show features, the on-ice debut of Lightning McQueen, Mater and the crew of Disney·Pixar's Cars, along with Disney mainstays The Little Mermaid's enchanting undersea kingdom, the escape of Woody, Buzz, Jessie and the rest of the toys from the Sunnyside Daycare in Toy Story 3, and the adventures of Anna, Olaf, and Elsa from Frozen.

This show also includes a first for the Disney On Ice franchises, with a one hour pre-show centered around various Disney Princesses and giving guests the chance to see, up close and personal various Princess' gowns and mementos. The first variant of the show was the final Disney on Ice show to feature Wayne Allwine, Mickey Mouse's longtime voice actor, as he died in May 2009.

Stories represented in this show

Opened on September 1, 2006 as Princess Wishes and then Princesses & Heroes. This shares abbreviated versions of the stories of popular Disney Princess characters, including Belle, Jasmine, Cinderella, Aurora, Moana, Rapunzel, Ariel, Tiana, Elsa, and Princess Anna and Miguel from Coco with Tinker Bell and her fairy friends serving as the presenter of the show. During the number "Under the Sea", a few lucky members of the audiences are given the chance to ride in a boat, that travels on the ice, giving them a chance to participate in the show.

Opened on September 3, 1999, Let's Celebrate has also been known as The Magical World of Disney On Ice, 100 Years of Disney Magical Moments, 75 Years of Disney Magic, 100 Years of Magic, and All Star Parade. There were overhauls in 2005, 2007, 2009, 2010, 2012, and 2015 and so on where characters from Finding Nemo, Lilo & Stitch, and The Incredibles are also featured. As of 2015, Daisy Duck, Chip and Dale, Stitch, Pocahontas, John Smith, The Incredibles and It's a Small World were omitted and The Princess and the Frog, Tangled and Frozen replaced them. In 2017 Finding Dory replaced Finding Nemo. In 2019, the Toy Story 4 segment was added to the show. 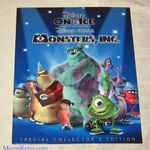 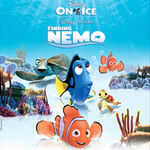 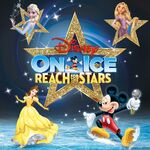 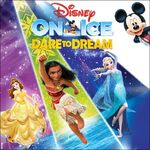 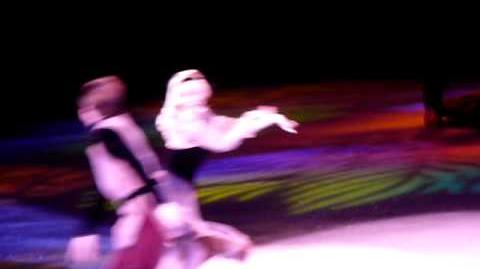 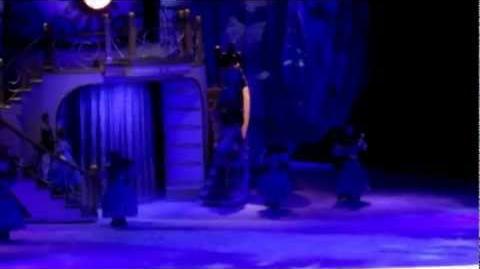 Cinderella - So this is love 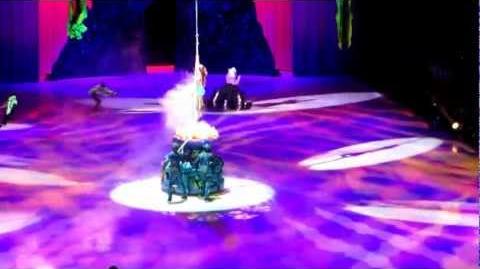 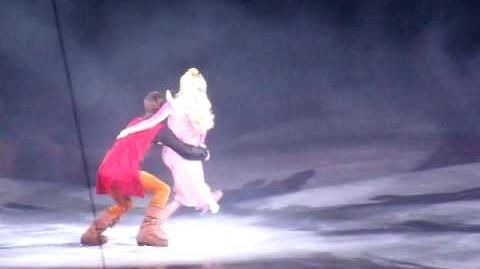 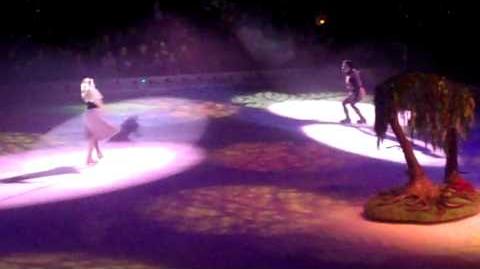 Sleeping Beauty, Once Upon a Dream.MP4 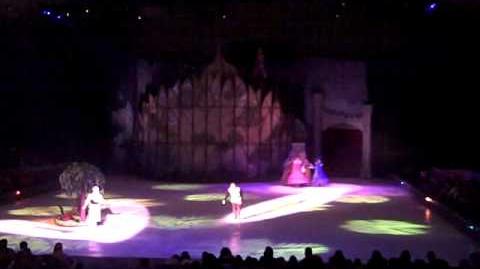 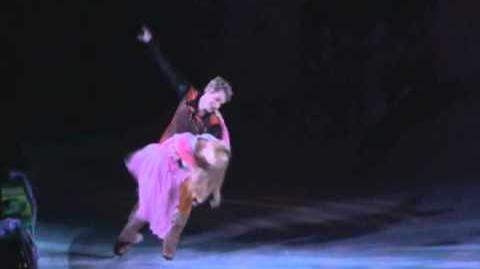 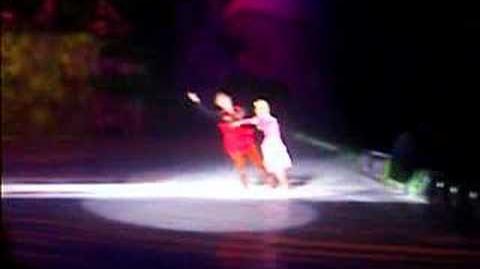 Once Upon A Dream- Sleeping Beauty 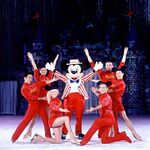 Mickey and the Mousketeers

Brittany Elliot ice skating in a Pre-Show performance for Disney On Ice.

cast photo of Disney on ice 100 years of magic

Snow White and her prince