Disney's Spring Promenade
Disney Pirate or Princess: Make Your Choice was a combination parade and show at Disneyland Park (Paris), as part of its 25th anniversary celebration and a promotional event titled "Festival of Pirates and Princesses" back on March 30, 2018. Its closing date was March 17, 2019 just shy of 18 days for its one year continuation.

It involved more than 85 performers. Show director Christophe Leclercq described this interactive and unrestricted show as follows: “This is the first time we have ever immersed our guests so fully in an outdoor show. They decide on their team and they experience a different story depending on the choice they make.”

During this daily interactive show, Disney Pirates led by Jimmy Ocean and Minnie Mouse shove off at the top of the tide to sail down Main Street, U.S.A. and Central Plaza Stage. With an acrobatic extravaganza blasting across the bow, Minnie’s pirate ship comes about to face off and meet Betty Rose and Mickey Mouse accompanied by a Disney Princess Regalia in front of Le Château de la Belle au Bois Dormant and Le Théâtre du Château.

Guests could choose to join in the fun of a Buccaneer Bash or dance the waltz in the middle of the Royal Ball for an epic grand finale. It took place several times a day at the park, featuring many Disney characters and dozens of colorful performers. Guests can choose a different side each time for a unique experience celebrating these two worlds like never before.

The two worlds merged several times a day. Setting off from opposite ends of the Parade route, both the Pirates float and Disney Princesses float stopped halfway and immersed guests in a musical celebration. Then, the floats headed to Central Plaza where they came together for a spectacle of guest interaction.

The park recycled two floats and themes from its former daytime parade, Disney Magic on Parade, which ran until early 2017, at which point it was replaced by Disney Stars on Parade.

On the Princesses float, guests could see the Princess heroes, like Cinderella and Belle. Guests could also see more recent favorites, like Rapunzel. Christophe said, “There will be nine Disney Princesses in total, as well as Moana—and they will be joined by none other than Mickey Mouse!” with their team leader, Betty Rose. They were surrounded by a troupe of dancers in costumes bursting with flowers and other natural sculptures and will be celebrating the Fantasyland world, where dreams come true.

In 2018, Ariel was in her mermaid form and sat on her themed car from the former Disney Stars 'n' Cars parade at Walt Disney Studios Park.

On the Pirate side, a huge galleon sailed down Main Street, U.S.A. Captain Hook and Mr. Smee were on-board, up against Peter Pan and Wendy Darling, as well as Minnie Mouse in her best buccaneer outfit with their team leader, Jimmy Ocean. “New Characters also join this crew, including Jake the Never Land Pirate from Disney Junior’s Jake and the Never Land Pirates, who will sail by on the hull of his ship!”. An acrobatic crew of pirates could be seen leaping from one mast to another or up into the air, making this spring cruise a joyful, musical adventure celebrating the spirit of Adventureland. 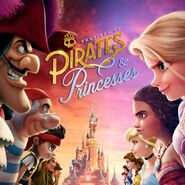 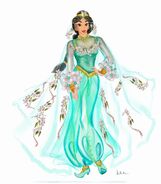 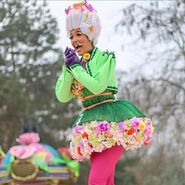 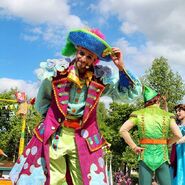