Get ready for hard-hitting tackles and wild touchdowns as Mickey, Goofy, and other Disney characters take to the gridiron. In Disney Sports Football, you'll create a team and compete in four modes: Challenge, Cup, Exhibition, and Practice. You'll have plenty of running and passing plays, offensive and defensive formations, and turbo moves to master, plus magic items to boost your team's performance. In single or multiplayer modes, you'll face a variety of opponents inside fantastic stadiums. 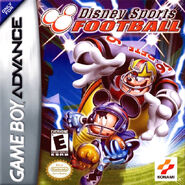 Add a photo to this gallery
Retrieved from "https://disney.fandom.com/wiki/Disney_Sports_Football?oldid=4107891"
Community content is available under CC-BY-SA unless otherwise noted.