Disney Sports Snowboarding is a snowboarding-themed video game developed and published by Konami and released on Game Boy Advance in 2003. The game features the Disney universe and is part of the Disney Sports series.

The game features various modes such as Time Trial, Rally, Trick, and single race. They are five stages and around 30 boards to unlock, and a total of 6 playable characters. 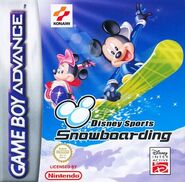 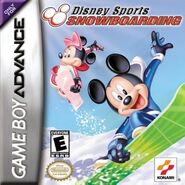 US Cover
Add a photo to this gallery
Retrieved from "https://disney.fandom.com/wiki/Disney_Sports_Snowboarding?oldid=4016656"
Community content is available under CC-BY-SA unless otherwise noted.