This was all led by the ringmaster himself, Mickey Mouse. This event lasted from March 30, 2001 to September 30, 2001. The parade contained 3 floats:

The parade started at Fantasyland, and made its way to Main Street, and then would stop. Classic Disney Characters came out to be a part of the show, and the show begins. Mickey introduced each act, starting with Goofy's boxing ring. Goofy lifted dumbbells and performed tricks with the kids, and even lifted up his assistant.

The next act was Hyacinth's trapeze; in which a trapeze artist flew through the air, but it comes to Hyacinth stealing the show. The final act was the Casey Jr. train, where Minnie Mouse and Roger Rabbit would clown around, and Roger, while climbing a mast, lit his tail on fire, so Mickey calls all of the clowns to help put it out.

The show ends with Roger sliding down a pole, into a bucket of water. Finally, the parade floats leave, but the Disney characters stayed on Main Street for a 10 minute Meet N' Greet. Unfortunately, it had to stop in the middle of the run, due to a mob that surrounded them. 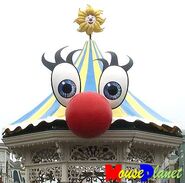 Minnie with the Clowns 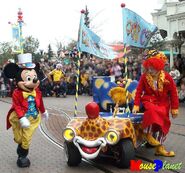