In Disney theme parks, the utilidor system is a system of some of the world's largest utility tunnels, mainly for Walt Disney World's Magic Kingdom in Florida. The utilidors, short for utility corridors, are a part of Disney's "backstage" (behind-the-scenes) area. They allow Disney employees ("cast members") to perform park support operations, such as trash removal, out of the sight of guests to avoid ruining the illusion that is being created. Thus, guests are strictly forbidden from entering the utilidors unless a special tour is offered.[1] Additionally, the utilidor system is considered highly unsafe for guests to enter anyway, as falls and injury can occur here without the proper supervision.

They were first built for Magic Kingdom. Smaller utilidor systems are built under the central section of Epcot's Future World, primarily beneath "Spaceship Earth" and "Innoventions," and at Pleasure Island. Disneyland, in California, also has a small utilidor through Tomorrowland, made years after Walt's jarring experience.

According to modern legend, Walt Disney was bothered by the sight of a cowboy walking through California Disneyland's Tomorrowland en route to his post in Frontierland.[2] He felt that such a sight was jarring and facepalm-inducing, and detracted from the guest experience. Since the California Disneyland was small, such a tunnel system could not be feasibly implemented at the time. So when the new Florida Disney park was being planned, engineers designed utilidors to keep park operations out of guests' sight.[3]

The largest system of utilidors are beneath Walt Disney World's Magic Kingdom, but they are not a basement. Because of an elevated water table, most of these tunnels were actually built at ground level, and the Magic Kingdom was built above that. All the guests of the park see streets that are elevated by one story. Parts of Fantasyland, including the Cinderella Castle, are at third-story-level. The ground's incline is so gradual that guests do not realize they are ascending to the second and third stories. The Magic Kingdom is built upon soil which was removed from what is now the Seven Seas Lagoon.[3]

The utilidors are built on 9 acre (36,000 m2), and the floor plan is a circle with a path down the middle; the tunnel walls are color-coded to make it simple for cast members to determine their location. The utilidors can be accessed from a main tunnel entrance located behind Fantasyland, or through unmarked doors throughout the Magic Kingdom. Magic Kingdom cast members park about 1 mile (1.6 km) away and are transported via a Disney bus to the tunnel. Some shops, restaurants and attractions have direct access to the utilidors.[4]

Cast members navigate the tunnels on foot or in battery-operated vehicles that resemble golf carts. Gasoline-powered vehicles are not allowed in the utilidors (due to health concerns), with the exception of armored cash pickup trucks and, in extreme emergencies, ambulances.[5]

Due to safety and security concerns, Guests are not allowed in the utilidors, unless if they are allowed access on the $79-per-person Keys to the Kingdom tour.[5] It’s a tour for ages 16 and over, because one has a high likelihood of seeing partially-dressed characters and other things which can disturb the Disney magic for little ones.[6]

The utilidors have been referred to as an "underground city", the functions of which include:[4] 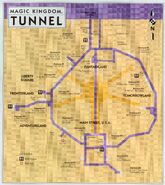 The utilidor entrance
Add a photo to this gallery

Retrieved from "https://disney.fandom.com/wiki/Disney_Utilidor_System?oldid=3840205"
Community content is available under CC-BY-SA unless otherwise noted.