100 Years of Magic (also known as Everyone's Story in Japan and Southeast Asia) is a Disney on Ice show that opened on September 3, 1999 as 75 Years of Magic.

It has also been known as All Star Parade in some other countries and The Magical World of Disney on Ice. Over 50 Disney characters are in this show. The show is choreographed by Sarah Kawahara.

Opened on September 3, 1999, 100 Years of Magic, has also been known as All Star Parade and The Magical World of Disney on Ice. In 2004, the characters from A Bug's Life were dropped and Jessie from Toy Story 2 and the characters from Finding Nemo and The Incredibles were added in 2005. Stitch was later added to the show since 2007 as well.

By September 4, 2015, Daisy Duck, Chip and Dale, Mrs. Potts and Chip, Bruce, Foulfellow, Gideon, Monstro, Pocahontas, John Smith, Stitch, the Incredibles, and It's a Small World were omitted and characters from The Princess and the Frog, Tangled, and Frozen are now added to this show, and Jiminy Cricket was no longer transitioning as he would only be part of the Pinocchio story. This variant of the show features a different look of the castle and a more specific plot where Mickey, Minnie, Goofy, and Donald explore various Disney film segments to give them ideas in making their movie. This variant looks similar to the first one. Also "Let's Rock the Mouse" is played in place of "Zip-a-Dee Doo-Dah" after the finale.

Starting in July 2017, Jiminy and the Blue Fairy are removed, and Finding Nemo has been adapted to Finding Dory which involves Jenny and Charlie. Two of the Green Army Men also join the finale. Judy Hopps and Nick Wilde also appeared in the pre-show but are not part of the ice skating family but were omitted on October 2018. So in the pre-show, a host, Donald, and Goofy arrive before the intro.

Starting with the UK tour on September 20, 2019, Bo Peep and Forky from Toy Story 4 has joined the cast.

In the 2019 French poster, even though Pluto was shown in Goofy's position, he does not appear in the actual show as Goofy ultimately took his place in the final revision. But it is unknown if Pluto would be added to the show though. Pluto previously appeared in the Walt Disney's World on Ice shows from 1981 to 1997, Disneyland Adventure from 2005 to 2011, and Let's Celebrate from 2009 to 2016.

It is also unknown when the show will be updated by having Moana and Frozen II added since the former is featured in all the other Disney on Ice shows except Worlds of Enchantment.

The original version of the poster/brochure from 1999 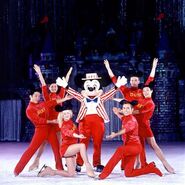 The cast (excluding Rafiki)
Add a photo to this gallery

It All Started With a Mouse

A new alternate picture of the intro

Donald and Goofy making their movie

Snow White and her Prince

As of fall 2019, Bo Peep and Forky have joined the rest of the Toy Story gang.

The late 2019-2020 French release poster for the show entitled La Magie Eternelle. Pluto is added but Goofy isn't seen in this poster.

The modified poster for the 2019-2020 France tour.
Add a photo to this gallery

Start a Discussion Discussions about Disney on Ice: 100 Years of Magic