Disney Wiki
Register
Don't have an account?
Sign In
Advertisement
in: Disney on Ice shows, Snow White and the Seven Dwarfs, Cinderella,
and 18 more

Disney on Ice: Dream Big is a Disney on Ice show which debuted in 2000 as Disney's Jungle Adventures on Ice and was later rethemed to Princess Wishes on September 1, 2006 and then Princesses & Heroes.

Mickey and the gang are taking a Jungle River Cruise through three of Disney's popular animated films like: The Lion King, Tarzan and The Jungle Book. Set in an exciting, adventurous, and exotic place - The Jungle!

Disney On Ice: Princess Wishes debuted on September 1, 2006 with characters from Aladdin, Snow White and the Seven Dwarfs, Beauty and the Beast, The Little Mermaid, Mulan, Sleeping Beauty and Cinderella. Mickey Mouse, Minnie Mouse, Goofy and Tinker Bell served as the main hosts for the show. In 2011, the show was retitled Disney On Ice: Princesses & Heroes. The Mulan segment was removed from the show and replaced by The Princess and the Frog and Tangled. In 2014, Frozen was added to the show. In 2016, the show was retitled Disney On Ice: Dream Big. During the "Under the Sea" number, a few lucky members of the audience are given the chance to ride in a boat which travels on the ice, giving them a chance to participate in the show.

As of late September 2018, Moana has joined the cast but Snow White and The Princess and The Frog have been omitted. Also, a new song, "Live Your Story", is performed in place of "If You Can Dream".

As of the November 2020 restart, The Princess and the Frog has returned to the lineup.

The following movies are represented in the show: 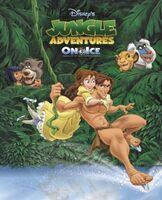 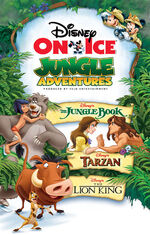 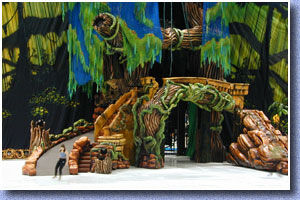 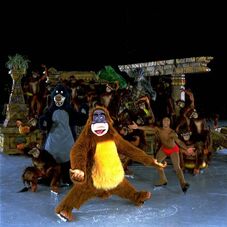 The Jungle is Jumpin' with Mowgli, Baloo, King Louie, and the cast of The Jungle Book. 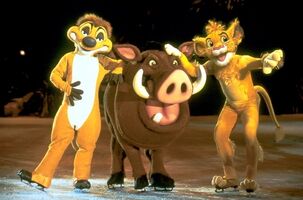 Simba, Timon, and Pumbaa are all happy go lucky with Hakuna Matata 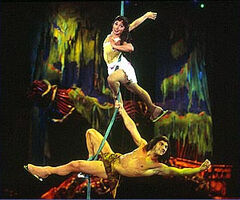 Tarzan and Jane swing through the jungle.

Poster from 2006 with Mulan 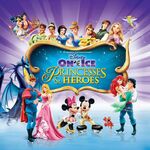 All Disney Princesses and princes.

Beauty and the Beast
Community content is available under CC-BY-SA unless otherwise noted.
Advertisement